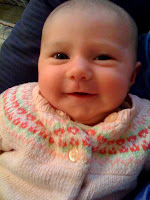 It's hard to believe that Lea is now over 2 months old. How quickly time flies!

We had her two month check up yesterday and she is now 10 lbs. 3.1 ounces and 21.4 inches tall. She's around the 40th percentile for weight, about the 20th for height and around the 30th for head circumference. Compared to Hallie at the same age, she is heavier and has a bigger head. Everything else checked out too: she is at age or advanced for her reflexes, tracking, etc and is very, very strong. So, even though she was not terribly impressed by the appointment (after all, she did get three needle vaccines and one oral one), we were. Other than some seborrheic dermatitis (cradle cap and baby acne), she was totally fine and quite obviously weathered her first cold with no problems.

Hallie also had a great check up: she is now a whopping 30 lbs. 10.3 ounces and over 37 inches tall, which is about the 60th percentile for both. That's an increase of over 10 ounces in about six weeks, which is unheard of at her age and clearly indicative of how inadequate her diet had been and how good it is now. She still has a pin head (she's at about the 8th percentile) but is following her own curve, so no major concerns there, either. And, in contrast to her last visit with the ped back in early February, when Hallie was not making great eye contact and seemed to be exhibiting some behaviors that seemed spectrumy to him, Hallie was a perfect charmer this time around: she was totally engaged (helping out as usual with the stethescope and otoscope during the physical, but also initiating games of catch with him and the med student who shadowed him). Had she been like this last time around, he would have never sent us down the road of following up with a developmental pediatrician. But we're sort of glad that we have (and he was impressed that we were able to pull strings that even he could not have managed to get into CHOP this quickly). Hallie very much has her on days and her off days and, even though her language is taking off these days and she is eating more and better food than ever before, there are still quite a few atypicalities of which we are all too well aware. We're the kind of parents who prefer to intervene and do something -- whatever we have to, really -- about them quickly and early so we are going to continue to head down this path and see where this takes us. I'm going to try to write a post about this later on today since there is much to say and it's worth saying this (if I can manage it) on Autism Awareness Day. But that's all for now: there are some flowers to be planted out back!
Posted by abby at 3:26 PM

Lea is adorable and I am glad to hear that both she and Hallie had such good check ups!

But I cannot believe Lea is two months old!

Great news about weights for both girls, and about Hallie's very non-spectrum behavior with the ped.

As you say, though, I think it's good to be aggressive in seeking options for Hallie, because her development has not progressed equally well on all fronts, but this is yet another instance of the parent knowing the child's typical behavior much better than a doctor usually can. Thanks for the good news!

I don't know if I;m ever going to be not surprised at the size of a full termer again. Goodness she's cute!

Great news all aroung for Hallie.