After realizing that we had taken very few pictures of our girl last week (and even let the camera battery run down), I've been trying to make up for lost time. It's helped that we've had a few fun events this past weekend that we wanted to commemorate, too.

First, our friend Kat (who is also an adult reflux adviser) came to visit on Friday. She brought Hallie a belated holiday gift/early Valentine's Day gift, and Hallie, needless to say, loved it.

If it's Elmo (or Sesame Street), Hallie adores it. 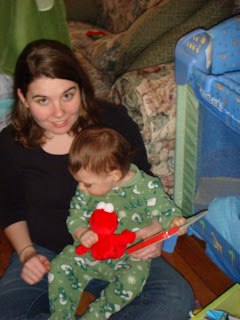 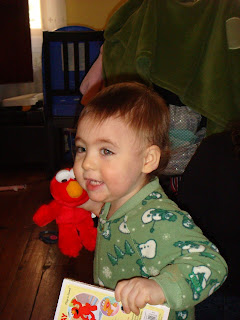 Witness her royal treatment of 'the boys,' as I like to think of them. Ever since Renee and Kim gave Hallie these finger puppets right after she got home from the hospital, she's been mad about them. Never mind that both of their hair is a bit shorter and more matted than when we received them. (Hallie has sharp teeth, and they will rival any barber's razor). She always pairs them up and frequently carries around big Ernie and little Ernie or big Bert and little Bert. It's interesting to watch her categorize. She has also begun saying a version of "Ernie" (it sort of has a 'd' or 't' in it; I am not certain why, but we'll take any name approximation) and now, along with calling Big Bird "buh buh" she calls Bert, "beh". 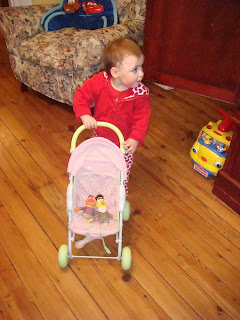 This next shot is a set-up. I just thought that pockets were the ideal place for Hallie's pals: 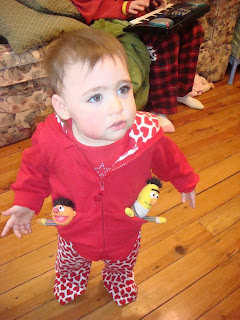 Little Ernie and Bert are nice stand-ins for Renee, who came over for her weekly fix of Signing Times, on Friday, too.

Friday night, cousin Megan and Grammy drove down to see our girl. Actually, Grammy came down to see Hallie and, while this was a bonus for Megan, she was here to get some help on her super-cool project on Northfield from Aunt Sharon. The two of them pulled all-nighters to make a very excellent model of the attraction that Megan devised for the town in which she lives. They also had fun at Pearl buying all sorts of creative supplies. I hope that Meg gets me a picture of the final results---I promise to post it. It's great having an aunt who is an architect.

But even if Megan was mostly here to do work, she couldn't resist playing with her littlest cousin. Here's a nice shot of our young keyboardist making a racket: 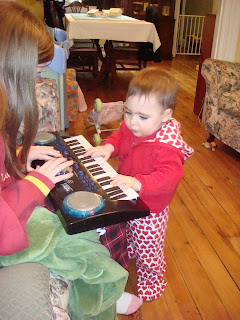 And, then, if that wasn't enough, the three of us and Megan drove down to Aunt Laura and Uncle Bryan's yesterday to celebrate cousin Adam's third birthday. It's funny that he and Hallie are a mere 16 months apart (to the day...today is Hallie's 20 month birthday). The party was a nice, family-only event that was replete with firetrucks (on the yummy and beautiful cake) and balloons. Hallie was especially fond of the latter, as you can see in these shots: 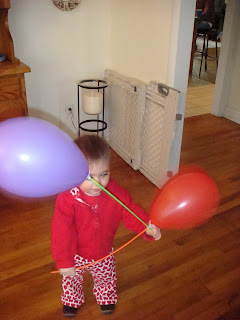 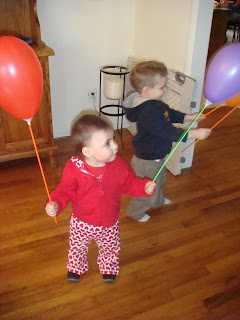 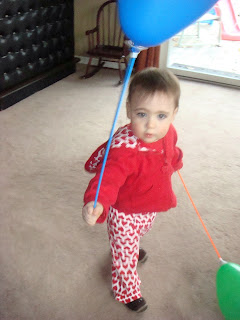 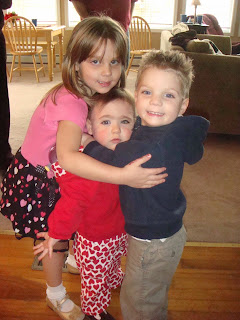 And here's a great picture of the birthday boy blowing out his candles: 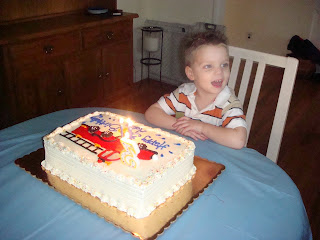 Of course, any day in Northfield would be incomplete without a snuggle from Aunt Laura. 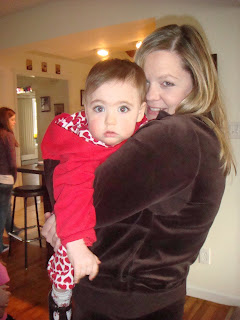 Aunt Laura was impressed and surprised at how heavy Hallie is getting.

And, then, just because, here's a great shot of Hallie playing in a sunbeam on the office floor yesterday. It's funny how much she resembles Bailey, our old dog, who used to do that. 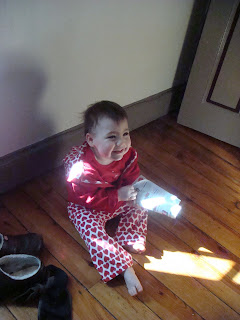 And, finally, here's one of Hallie doing some homework. Busy, busy, busy...Which reminds me that I need to do some, too. 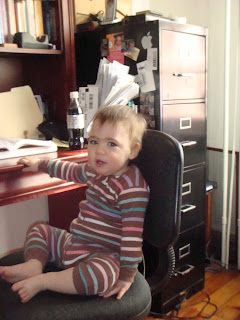 But, before I go, I just remembered that I saved the best news for last: we have now made it FIVE full days without a single vomit (and just two urps). This is a huge record and I hope we break it today!
Posted by abby at 1:05 PM

Oh my gosh!!! 5 days! It feels glorious, doesn't it? Congrats. Aidan has the very same Bert and Ernie and he LOVES them! Great pics...Hallie gets cuter every day!

Yep. Pretty jealous about that but very happy for you and Sharon!

Good news on the five puke free days! But more importantly, did Hallie get all of her work done in the office? :)

Oh I wish she got all of it done, because then I could've assigned her mine, too! Having just assisted in the great poopfest clean up (she pooped in diaper, then got her foot in it and her aerochamber in it during a change, then Sharon set her on the floor to clean up the changing table while I took care of her aerochamber in the sink downstairs and start the bathwater...but she had no diaper on, so she proceeded to revel in her nakedness by peeing on the floor...which Sharon cleaned up, only to find that Hallie (still sans diaper) had gone off and pooped ELSEWHERE on the floor... By the time I tossed her in the bathtub and Sharon cleaned up the room, we were quite literally wiped out. Pun intended. Hallie, in contrast, was happy as a clam.

On the bright side, other than sending back a little veggie booty in a mechanical urp (one induced by moms eager to feed their girl solids), we're now close to making a full 6 days without vomit. YAY!

Love the pictures! My little guy has become especially fond of elmo lately but still prefers the "cars" characters...speaking of, where did you get the cool cars pillow I saw in the background of one of the pics? COngrats on the puke free days although sounds like the poopfest was quite an ordeal as well!

5 days is AWESOME! I hope you break that record!

As for the pooping, and least she's consistent! Good to know her bowels are in good working order (maybe that's only something the mom of a NEC baby can appreciate).

Hallie is looking so grown up, especially in front of her desk.