Little Lea is on the move! 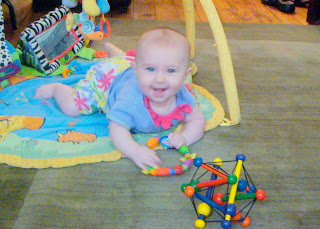 Little Lea, who is, after all, no longer so little (though I suspect that her nickname, "Baby Lea" shall always stick, even when she's a whole lot taller than I am), is on the move.
First the stats: at her six month check up, Lea weighed 15 lbs, 11 ounces, which is precisely what Hallie weighed at a year old (8 months adjusted). She was just over 25.5 inches tall, which places her firmly at the 42nd percentile for both height and weight (making her seem sort of square, I guess). Her head was just over the 50th percentile, which probably means that Hallie will be able to wear Lea's hats for a lot longer than Lea will (Hallie's head is at about the 10th percentile, though they stop measuring it at 3 years of age).
Speaking of Hallie, she somehow managed to weigh in at 32 lbs 13 ounces and was 38.25 inches tall, and consequently at about the 60th percentile for both weight and height. The weight seems a bit high (it was with a diaper on and prior to a bowel movement....sorry about the excess of information there!). But nevertheless, it's clear that Hallie has managed to start gaining weight again. We thank periactin, a bit of duocal and a relative lack of vomiting (we're now at 156 days and counting) for this.
But this post is not really about Hallie. It's about Lea's newfound mobility.
Lea has been commando crawling for a while now, but she's gotten a whole lot better at it. Instead of going backwards and in circles, she's now able to head in her direction of choice. And she's able to get where she wants to go pretty quickly. 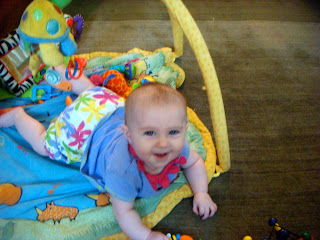 Oddly, perhaps, where Lea wants to go mostly is under the furniture. She has a particular thing for chair legs. 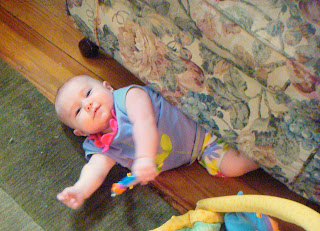 She also rather enjoys getting between pieces of furniture: 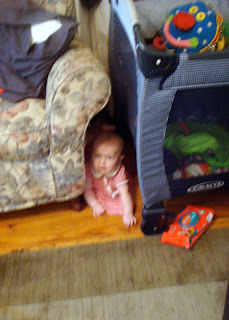 But what has brought particular joy to Lea's life has been her newfound capacity to get up on all fours and rock. She can only go backwards right now, but the kid is on the verge of really crawling. And this has her very, very happy and the adults in the household very, very frightened but.
But what frightens us even more is something that Lea did last night. While happily cavorting in her pack and play bassinet, Lea grabbed hold of the top bar and pulled to stand. I literally leapt off of the couch and across the room to grab her (Sharon momentarily--and I do mean for a single second--having averted her gaze from the little elf). Needless to say, we dismantled the bassinet portion of the pack and play within minutes of this event. From here on in (until she can find a way to climb out of it), Baby Lea will be using the pack and play as a play pen.
And in case you don't believe that the kid looks like an elf, take a peek at this smirk: 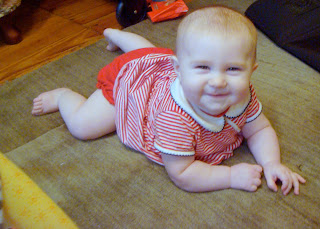 She is absolutely adorable!