We are so grateful that our girls (mostly) adore one another.  They are the age at this point where they play together regularly rather than parallel play.  Sometimes they'll make up games (they do a considerable amount of pretend playing which often involves riffing off of a theme, be it a beloved fairy tale like "The Three Little Pigs" or "Goldilocks and the Three Bears" or "Little Red Riding Hood" or a favorite television show like Ni-Hao Kai Lan or Peppa Pig).  They will assume various roles (and assign other roles to us and to Zen the cat, who participates -- sort of -- in a cheerfully bewildered feline manner) and act stuff out, using all of the millions of plastic manipulatives we own and the physical space of our home as props.  They also really enjoy reading books together:  Hallie will really be reading and Lea will pretend to be reading (she does so in a totally cute manner:  she loudly declaims the entire story that she has made up -- which is more or less based upon the pictures she sees in the book she's grabbed, which is inevitably a favorite of her older sister's -- and expects Zen, to whom she does most of her reading, to listen attentively).  We love it that books are probably our kids' favorite toys (which is saying something since we essentially live in an exceptionally poorly organized toy store).

But the games that our kids especially enjoys are really physical and sensory.  They love to race and chase each other through our pop up gymboree tunnel (one of the best $35 purchases I ever made); roll around inside of it or inside of their Princess Castle Tent with a gazillion balls or stuffed animals; or wrestle with one another like bear cubs.

The other night I took a series of pictures of them doing just that.  It's this series (or the series of shots I wish I had gotten) which is probably going to convince us of the absolute necessity of upgrading to a D-SLR camera (note to those few -- I think we're down to one -- people who still buy us holiday gifts:  please contribute to our camera fund instead!  Especially if you want pictures of your littlest grand daughters!)  Anyway, I took lots of pictures and none of them came out great and my pathetic editing skills did not improve them at all but hopefully the joy that these two girls felt shines right through: 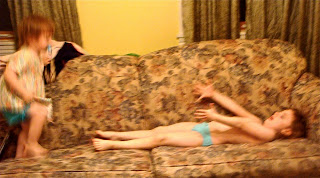 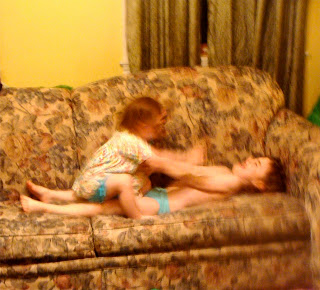 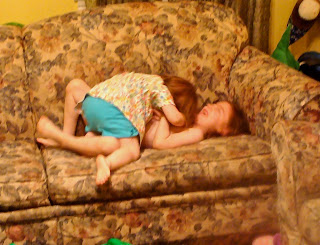 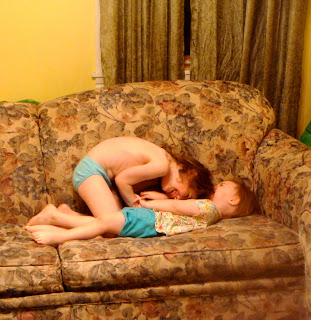 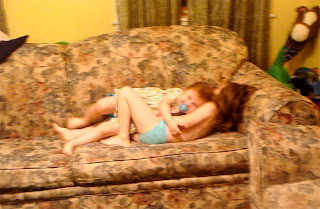 Looks like two of the happiest kids on the block to me!

I so want a D-SLR as well! Found one on craigslist still not in my budget. The pics are great anyway!

How wonderful!! Looks they are having a great time. And I know how much you loved seeing that :)