Hallie is a very silly toddler. Some of her favorite games are incredibly silly. Months ago, you might recall, Sharon began to play "where's Grover" with Hallie. This involves making lots of "dah-dah-dah-dah" and "zhip" noises, flying Grover around the room and over Hallie's head and eventually stuffing Grover into Hallie's shirt or pants and making her remove him. She still thinks this is great, but she's branched out a bit: 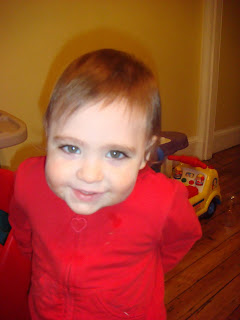 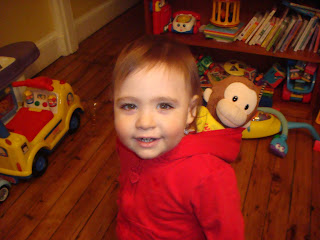 Another thing that Hallie really enjoys is being smushed, preferably by Karina. This works out well because Karina, as the daughter of a former Rugby player (who gave this up after getting her PhD for a career as a consultant), Karina's got tackle holds in her genes. So she loves to run up to kids and hug them...and squeeze them...and knock them down. 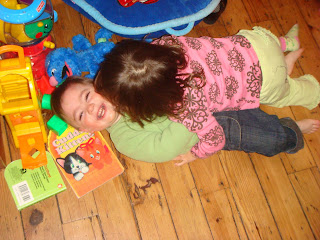 Hallie adores this (though we make sure that Hallie's belly is not full when this happens because I think neither of the kids, nor their horrified parents, would enjoy any of the outcomes of this scenario terribly much).

So, after deeming enough Rugby to be enough, we had Karina modify the game a bit: 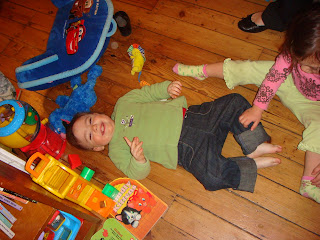 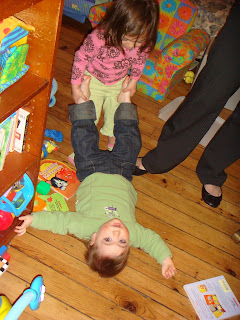 Suffice it to say that being dragged along the floor by Karina was nearly as much fun as being smushed by Karina.

Hallie's other latest greatest form of silliness involves climbing up on the table next to the couch and diving back onto the couch when we tell her to get off the table. An alternate form of this game involves climbing into the changing table portionof the pack and play located on the other side of the couch and trying to dive off of that one (to parts unknown). Now, technically, this brings her into compliance with the command "get off the table" or "no climbing into the changing table" or what have you. So we have to concede this one. But it doesn't comply with, or facilitate, our goal of keeping Hallie's head in one piece, remaining out of the CHOP ER and silly, frivolous stuff like that. So, over the past two days Sharon and I have each, independently, had to remove Hallie from the couch, stand her up in the living room and give her a talking to that went something like "You are not to climb on the table/changing table because it is dangerous and you will hurt yourself and so you are now officially banned from doing so". Needless to say, and as we both admitted readily to one another, the talking to made us feel better--like we were doing something proactive and being good parents and removing her from a situation that was dangerous, yada yada yada. It appears to have a less than effective impact on Hallie, who continues to climb. So, we need to start thinking about discipline, and hoping that the crocodile tears that this induces will not result in yet more vomiting.

Speaking of crocodile tears, along with ramped up silliness, we've also had ramped up terrible-two-tantrumness lately. Hallie loves to put my shoes on her hands and feet---which is okay with me---but lately she's also taken to trying to pull whatever remains of the fleecy inners of my clogs out of the footbed and EAT it. (Why does she eat fuzz and fluff and cardboard and not food is beyond me). This is not OK. My feet are none too sweet smelling and I cannot imagine that my clogs are anything but repositories for stinky stinky germs and she will not, under my watch, eat my shoes. I feel ridiculous even typing this. So I took them away. And she bawled. It was quite silly, really, and I did not give in, but I did suppress my desire to laugh at her. Eventually, with redirection she forgot (temporarily) about how good my shoe fluff tasted. Eeeeewwww.
Posted by abby at 8:42 AM

We have the same table issue. I don't help matters by cracking myself up every time I tell P'ito to get off the table.

The shoe part actually made me laugh out loud, and Erik and I question that daily... like, why is he willing to gnaw on his diaper that I just changed that he managed to roll over and get before I put the new one on, but he won't eat pureed fruits?

You are a much kinder momma than me because I do not do well at suppressing my laughter when my kids are sobbing over whatever disgusting thing I won't let them chew on. I think Emy ate the tops off an entire box of crayons yesterday. We're there with you on the pre-two toddler fits, and the table climbing. I remind Emy we've hit our quota for hospital AND urgent care visits with her older siblings so she's not allowed any serious injuries. :)