This Week in Hallie's World... 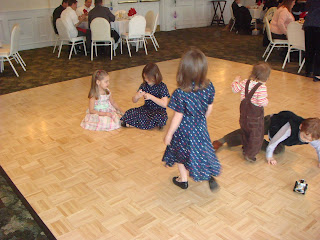 Well, I've done it again: I've fallen behind on blogging. I thought that this would be a good week to catch up on things given that it was spring break, but that seems to have not been the case. I've been busy grading (still more to go...deeply depressing endeavor), reading for class, and trying to invent creative and provocative classroom exercises. This all translated into a virtual blogging drought.

Anyway, here's the recap on our lives.

Last Sunday, we headed down to the Shore (as we lovingly refer to the New Jersey coastline) to celebrate Aunt Laura's 40th birthday. Sharon pulled a couple of all nighters putting together a masterful montage of Laura's finest moments (including some very good representatives of the variations of hairstyles for which the 80s are famous) but somehow we managed to not take a SINGLE electronic photo of the birthday girl herself. She had a great time and everyone loved the video, but spawn-centered parents that we are, we left the shindig with dozens of pictures of our own kids and none of Aunt Laura.

Suffice it to say that Hallie had a lovely time at the party. There was a nice open dancefloor that we were not using (since this was a brunch event) and all of the kids (various of Hallie's cousins, some of whom she had never met before) commandeered it as a play zone. Hallie gleefully entered the boisterous mahem and was particularly enamored of playing with Alex's truck, engaging in games of catch, and, especially, running back and forth like the whirling dervish that she is: 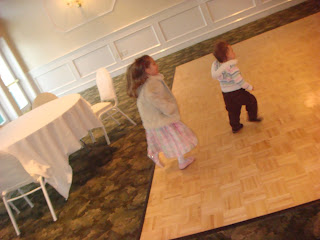 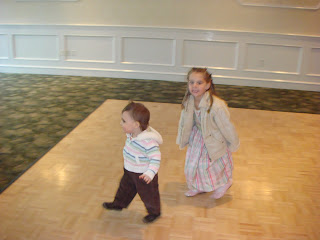 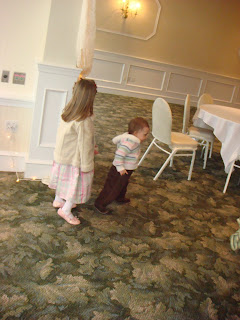 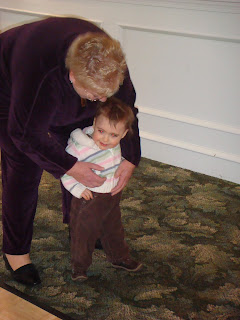 Needless to say, on Monday Hallie was totally wiped out and she's been needing to sleep a whole lot all week which makes us think that another growth spurt is imminent. All of this is to say that our prized possessions are in even further danger of being toddler-handled by Hallie and will need to be moved even further out of reach.

We also replaced our under-utilized Rainforest Jumperoo with Hallie's new art desk this week, and Hallie has been having a blast coloring at it. Mostly she colors herself and sucks on the markers, but some of her creativity has made it onto paper: 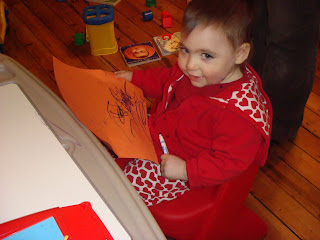 Otherwise: this week has been relatively uneventful. Hallie did have two more vomit free days in a row, flanked by other, alas, more typical days where she spewed forth in one way or another. And today (yes, Easter Sunday) we had an evaluation at a Feeding and Speech clinic that is covered by Sharon's insurance. The therapist seems knowledgeable (deals with both swallowing issues and apraxia) and, sort of a schlep of about a half hour and one state away. Sharon's insurance has no limit to speech therapy sessions AS LONG AS Hallie qualifies (and even with her complex medical history, who knows yet whether we'll face a fight to precertify services). This is far better than my awful insurance that allows 24 sessions combined of PT/OT/Speech per year and only at facilities totally inappropriate for a toddler who can't swallow or speak correctly (they wanted us to call the Sports Medicine team at Pennsylvania Hospital or a rehab center for adult stroke victims, which are the only two facilities within 25 miles that are in-network. WTF?????).

Anyway, the therapist feels that Hallie clearly needs some help with both of these things but that, with the correct help, she'll be a totally different kid in terms of eating and speaking within 6 months or so. We're happy to give it a try. There's so much research to do, and making sure we're on top of all of this, as well as Hallie's other medical concerns (GI, Pulmo, trying to get her covered again for Synagis--which she was dropped from this month but there's a chance the new insurance will cover it, Allergy, and her regular Early Intervention therapy appointments) means that we have a lot to juggle. Hallie really is such a sport about things and is totally happy to hang out and play in doctors' and therapists' offices, and in this we're lucky. She did not have to end up being as good natured as she is, and even with her toddler tantrums and testing (yes, terrible twos have begun!), she's the sweetest and greatest kid in the world and we're trying to be the best moms to her that we can be.

Enough rambling---now off to join the wife and daughter at Karina, Mark, and Vanessa's for Mark's yummy burgers. We LOVE our neighbors...having dinner cooked for you half the week (as well as the stellar company) totally rocks!
Posted by abby at 5:59 PM

isn't insurance great? i hope you get everything that you need from the system...it's a hard thing for me to navigate!
stacy
www.aboutthelarsons.com