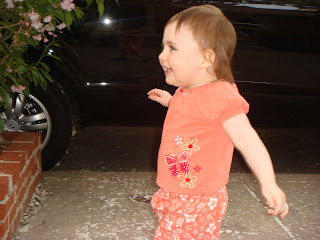 As Sharon reminded me tonight, we've gotten a bit clinical on the blog of late and haven't had quite enough cuteness. Now, while the acronym for Hallie's food allergy (FPIES) is, indeed, plenty cute (but the problem, suffice it to say, is not), I think she's got a point here.

So, without further ado, here's an early morning dose of Hallie cuteness.

Please note the hairbow in this picture. It is unlikely that you'll ever see one again since Hallie STILL can't stand having anything in her hair! 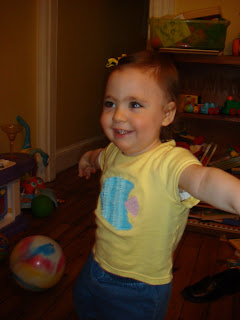 In this shot from last week, it's clear to me that she's no longer an elf but a little kid. 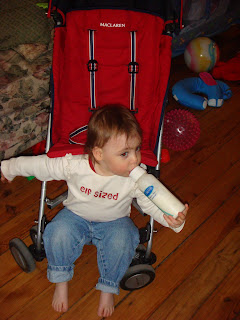 First, let me point out that Hallie is the sweetest little kid imaginable. Right now, she's still in a major hugging and kissing phase. She'll kiss us all the time (usually even if we don't request kissing) and always wakes up smiley and happy to see us (she waves hello, which is what we take to mean 'I love you' in lieu of the words she cannot say). She also kisses everything that she adores--pictures of babies in books (a big hit for her), the pictures of babies on her baby food jars (she insists on doing this multiple times during every meal), her stuffed Sesame creatures, and most recently, Katie the Kitty whom we are cat sitting (for Josh and Nancie and Ethan and Cole, who are getting their floors redone before putting their house on the market---boo hoo!). She also tries desperately to kiss Karina good bye every time she leaves (and tried this tonight with our other little neighbor, Adam), but the kids are a bit more resistant than the cat. O

Hallie also loves to hug, and she'll hug anything that she adores at any given moment. This could be one of us, or a stuffed animal, but it can just as easily be a small wooden spool, a tiny fleck of something that she picks up off the ground, or anything else that she fancies. It's a very endearing but odd habit.

Speaking of endearing and odd, she also likes to use all sorts of objects as telephones in which to inquire "who is it?" Often these are real telephones (we've blocked outgoing long distance as a prophylactic measure around here), but just as often they are not. They can be telephone-ish remote controls, but they can also be shoes, refrigerator magnets, or in the case of one 'telephone' this past week, a strand of hair. Talk about fiber optic communication! We don't discourage this; after all, it's a great way for working on fine motor skills, of which Hallie seems to have plenty. 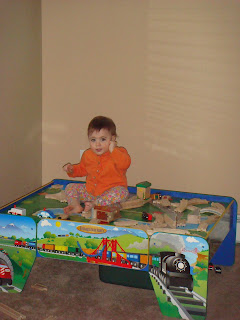 Hallie has also gotten great at doing chunky wooden puzzles and we've recently discovered that she knows most of her shapes and quite a few colors (at least when associated with these familiar shapes). It's hard to tell what she knows often because of our language barrier, but we were very impressed that she could bring us the purple rectangle from her puzzle and that she could put the pieces into the puzzle in the order which I stipulated. Very cool.

On top of this, Hallie has gotten very, very fast in terms of her walking/running. Lately she insists on walking to the park, and loves to head outside at all opportunities. She's none to fond of holding our hands, but we are working on this. And today she spent a good couple of hours running down the block, pausing to watch us blow bubbles, and trying (unsuccessfully) to evade capture. 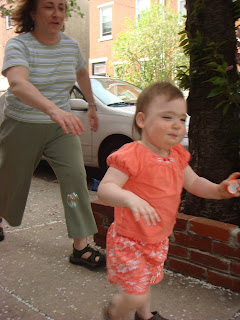 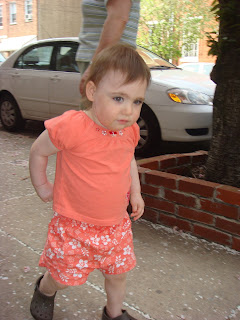 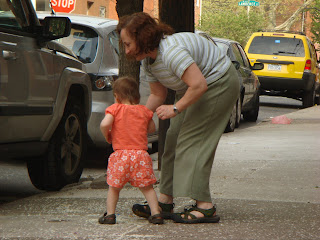 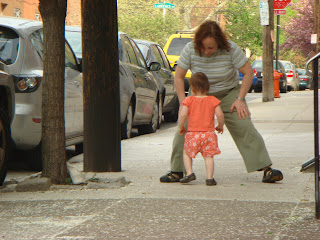 Later on, after a run over to New Jersey to Babies-r-Us to purchase some glass Doctor Brown bottles (we hope she is gentle with these!), Hallie had a grand time playing with Adam's toys and by the time she came in, she was streaked with mud and crusted with dirt and looked like a fine picture of a happy kid enjoying summer.

Less enjoyable is the eating/vomiting front, alas. I won't belabor this, but suffice it to say that we have had no vomit-free days this week (so our total for the year still stands at 32) and keeping a food diary hasn't demystified what's going on for her allergy-wise. The only thing we can think of is that it takes a while to clear out her system (did this with cow milk last November, too) and we're keeping our fingers crossed that once this, and the current bout of canine- and eye-tooth-teething is over that we'll have some clarity about what's going on.
Posted by abby at 4:15 AM

What a sweetie! She's gonna keep you on your toes running through the sidewalks of Philly!

I love the run away action shots! :)

She is truly an adorable little girl ... and quite the little speed-racer I might add!

i think with all our little ones have put us through and that they have lived through, the good lord graced them with an extra dose of joy...perhaps for us to learn to take a deep, long breath and just enjoy the little things. she is such a cutie!

She sure is a cutie! Isn't it funny how we couldn't WAIT until they started walking and now sometimes wish they were just a little bit less mobile!