It's been quite a holiday for Hallie.

First, in the process of picking up numerous last-minute gifts last week, I saw this onesie at the Baby Gap (for a whopping $4.99) and had to get it for Hallie:

The shirt says it all!

Actually, I was looking for another in Hallie's size, but they were all out. What was its slogan? "Diape(red)" of course. I did get it in a much smaller size for an expecting friend of ours (whose identity will not be divulged quite yet since she's only 13 weeks along)

Then, on the 22nd, after a copious amount of drooling and finger sucking, we realized that Hallie's first one-year molar has poked through. Allow me to assure you that it is already quite sharp and that Hallie will no doubt hone it to even more of a razor like status in the upcoming weeks. Oy. Three more are clearly on their way. Should be fun around here. I guess that Hallie has reinterpreted that old ditty, "All I want for Christmas is my back teeth."

On the 23rd, Sharon and Hallie headed off to Aunt Laura's (forgetting the copious number of goat milk bottles that I had prepared -- but happily they had enough to get them through the night); I stayed behind to finish more grading (it's now DONE!) before joining them the next day.

Hallie, Grammy, and Sharon picked me up at the NJ Transit station straight from Fisher's Shoe Store, where Hallie was outfitted with her first real pair of walkers (having just outgrown her prewalkers, something that we did not realize until Auntie Neystice pointed it out to us). Hallie is really proud of her new shoes but still prefers chewing them to wearing them.

Then, it was off to Dawn and Bill's for the annual seven fishes dinner (though I think there were really only four fishes, and assorted cheese, chocolate etc). Hallie had a ton of fun pulling on the snowman's nose and banging on the basement door in the hopes that she might descend the steps and play with the bigger kids. Sadly, she was stuck with us.

Then it was time to change into jammies and await the big morning. Hallie had a typically rough night (with her teething comes more reflux and vomiting, alas), but that did not stop her from getting up the next morning for the reading of Santa's Letter (which included her, for the first time this year) and the wonderment and excitement of opening presents.

Hallie was super excited because Adam and Hannah were super excited; even though she did not quite know what was going on, she knew that something was up! 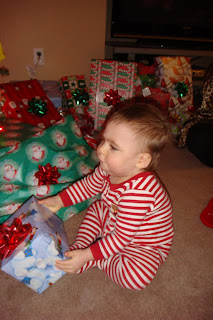 The tree was lovely, but sadly I did not get a good shot of it. Hallie surprised all of us by NOT eating the ornaments (though she did make several dives for the garland beads strung on its branches). 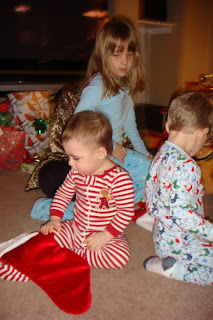 Hallie was very excited at the prospect of ripping bows off of presents and trying to undo the paper on most of the gifts.

And, of course, our little girl got tons of great toys and clothing and books and found the whole experience quite enjoyable. 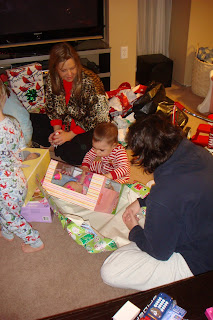 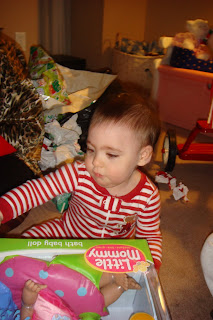 Aunt Laura got a ton of snuggles in with Hallie and this made both of them really happy: 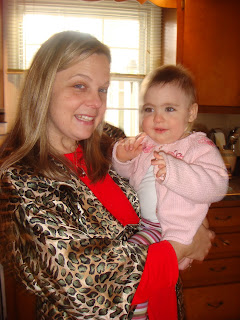 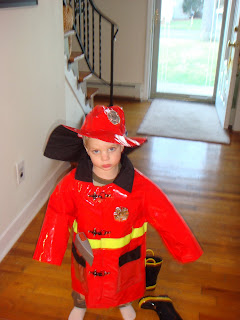 And, I might add, he's probably the first fireman whose main tool is a vacuum; he LOVES vacuuming more than anything else and spent most of the day sweeping up the carpets with his very realistic (and realistic sounding) toddler-sized Hoover Wind Tunnel. At the end of the evening, as he was being changed (quite reluctantly) into his jammies, he even swept through the house with his vacuum in the all-together. Happily I spared him much ridicule as a teenager by failing to get a shot of that!

Later in the afternoon, Grandma Sandy, Poppy Jack, and Great-Grandma Ruth (Uncle Bryan's mom, dad, and grandmother) came for dinner. We had an all Jewish Christmas dinner...very funny. 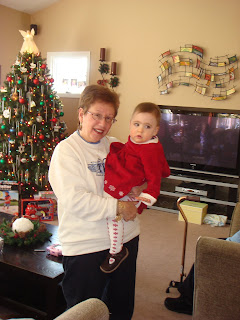 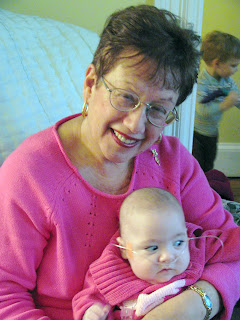 Wow, what a difference a year makes!

Alas, Hannah and Adam began to come down with a cold on Christmas Day, and by yesterday, so did Sharon and Hallie. Hallie ran a fever last night and began getting snotty, and Sharon developed an awful sinus condition (she always does when she gets a cold).

But the good news is that, aside from a little upper respiratory snarfliness and an increased tendency towards barfiness (great!), Hallie's doing all right. She had a pulmonology appointment this morning and satted 97-100% and her lungs sound clear. Hopefully she'll keep this up (and hopefully I did not just jinx her by saying this).

Liz, her pulmonology fellow, was thrilled by how Hallie looked; it's been 3 months since the last visit and Hallie has really taken off in all sorts of ways since then. And Hallie's weight gain has been most impressive---as of this morning, she's a whopping 24 lbs (and a walking advertisement for how bulimia does NOT make you lose weight). Anyway, we hope that this gives her the reserve she needs to fend off any major problems from this cold and that she's back on track soon.
Posted by abby at 2:15 AM

It sounds like you guys had a great holiday season! I just love the red stripped PJ's.

Wow on Hallie's weight...she's officially bigger than Amelia (I think)! I hope she handles this cold well...we all hate the extra mucus and vomit it's likely to produce.

Happy Holidays! Looks like Hallie had a good time! Glad to hear her lung appt went well. I am once again amazed with her weight gain! Way to go Hallie!

Aloha Abby, Hallie looks so cute & healthy. Thank you for your comments on my blog. It's nice to know other preemie parents out there.