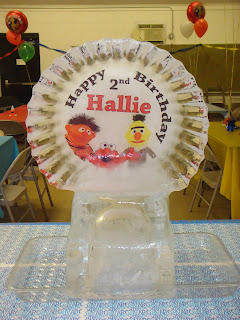 Hallie's birthday party was last Saturday. Have you guessed yet that the theme was Sesame Street? Sharon had the brilliant idea of an ice sculpture, which is just perfect for a kid who cannot eat cake but who loves ice, and Aunt Vanessa decorated the lovely Elmo cupcakes. 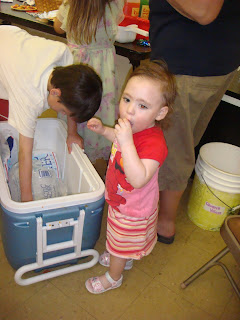 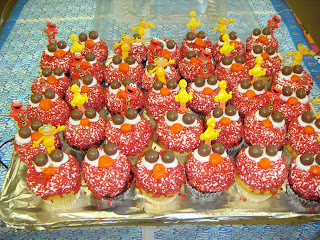 We held it at the local playground, which has a great (and huge, and most significantly given the heat wave we were experiencing last week, air conditioned) rec room that could accommodate the throngs and hordes whom we had invited. (Even though we vowed to keep it small this time around, we did not quite manage to keep to that promise).

Hallie had a rough end of the week last week---she was still working the soy out of her system, which was a mess---so she ended up taking a very long late morning/early afternoon nap. While this meant that she missed the first hour of the festivities, the upside to this was that she was well rested for the balance of the party.

For a 2 year old who doesn't yet attend preschool, Hallie sure has lots of little friends. This is just a small subset of our young party-goers: 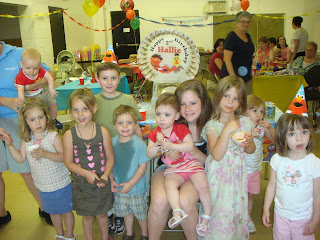 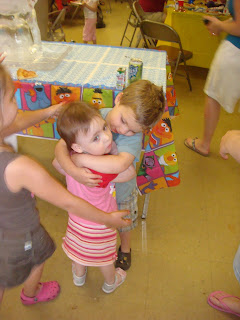 Hallie returned the favor by crowning Adam with one of the festive Elmo birthday hats: 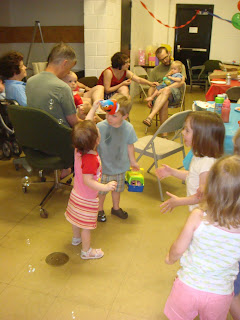 Hannah was equally thrilled to see Hallie, and Hallie made her very happy by saying her name. Hannah made Hallie very happy by pushing her on the swings: 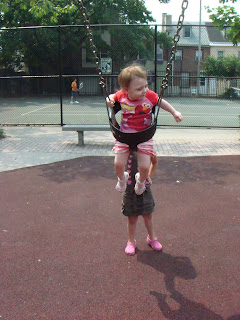 We also had some superstar former preemies at our party, including Nina Fox, who is even cuter in person than she is in the many photos of her posted by her lovely parents, Judith and Jason. We hope that Hallie and Nina get to hang out some more one-on-one this summer. 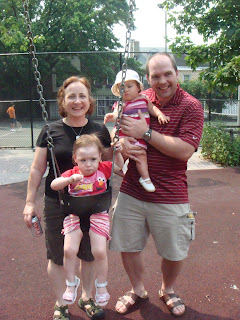 The Bell twins, 23 weekers who were born exactly one month prior to Olivia and Hallie and whose impressive development we watched from across the ICN at Pennsylvania Hospital, also made it to the party with their mom and aunt. They are doing so well (and impressed the heck out of Eric Mallow, one of Hallie's neonatalogists, who also attended the gala event. Eric was beaming like a proud parent and got some great shots of Hallie trying out a 'hot' (as in borrowed from another park user) tricycle and engaging in all sorts of antics). Here Hallie is striding into the party space with Payton Bell (I THINK!) right behind her.

And no party retrospective would be complete without a photo of Aunt Laura holding our girl: 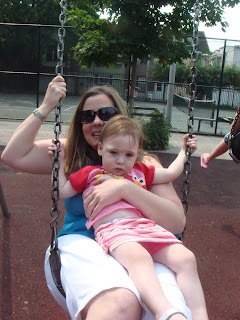 On Sunday, Hallie, Sharon, Grammy, and I went to our favorite toddler playground, Three Bears Park, for a wild session of swinging, sliding, and bubble blowing. Then we came home and Hallie tried out one of her new ride-on toys, a hippity hop horse that Alex (and her parents Sheila and Brett) gave her. She thinks it's super cool. 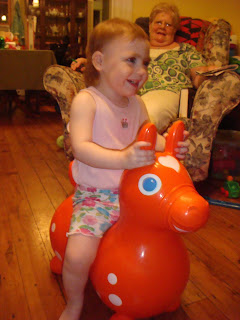 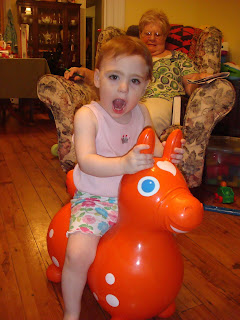 Hallie also got to test drive her new tricycle (given to her by Karina, Mark, and Vanessa) but we don't have stills of that yet. Let's just say that we're impressed that our girl understands where to place her feet and that she needs to peddle. Unfortunately, she's about a half inch too short to have quite enough leverage to go (a good thing because she still needs a helmet and doesn't quite get the concept of steering. Anyway, that will come in time.

Anyway, I just wanted to say a big THANK YOU to everyone who helped make this a special day for our little girl!

In other news, now that the soy is out of Hallie's system, she has had several great days in a row. We are up to 55 vomit-free days this year.

Just as important, Hallie's mood has been really good, she is well-rested, and she is talking up a storm. She was exceptionally well-behaved at our ENT appointment yesterday morning (especially since we had to drag her out of bed, asleep, at 7:45am to make it to our 8:20am appointment on time) and followed all the directions of the very nice audiologist who tested her hearing. Happily, her hearing tests within normal range, though I suspect (from her lack of response) that she cannot hear very high-pitched, soft noises. But still, given the heavy doses of IV antibiotics she received in the NICU and the length of their courses, we are very happy that she has avoided major hearing loss. And her ear tubes continue to look great and are doing their job; that she is no longer refluxing now that her allergies are mostly under control (except for when we poison her during our trials) helps a great deal with this. So we don't need to be back for another SIX months. That's fabulous. We no longer see anyone more frequently than twice a year, and this is super duper wonderful...especially in comparison to the weekly visits we made to the ped last summer and the every-two-to-three-month appointments we had with most of our specialists during that first year and a half of Hallie's life.

Today's our big 2 year NICU follow-up and I'll post about that later...

Meanwhile, here's one last pic of our kiddo, who really is too cool to be 2! 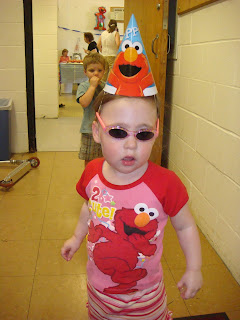 HAPPY BIRTJDAY HALLIE!!! What a very wonderful birthday party! We too may be doing Sesame St theme for S&E's 2nd b-day at the end of Sept. She is looking so beautiful and mature.
Hallie is truly amazing and has been an ispiration to us. We are so blessed to "know" you all. I hope one day we can meet in person. Our little ones are truly amazing aren't they?

Wow, I wish I was at that party! Nest year I demand an invite!

So glad Hallie was spoiled rotten, just as she should be!

Happy Birthday Hallie,
It is amazing how fast the time goes by. She has done so amazing and you Mom's must take all the credit. It looks like she had a wonderful party, hopefully one day she will be able to enjoy her cake too, darn allergies.

So glad you had a god birthday party Hallie! Happy birthday sweet girl!

She's adorable! Where did you get the elmo shirt? I think Ari will go crazy if we got her that shirt!

Happy Birthday to Hallie and Moms!