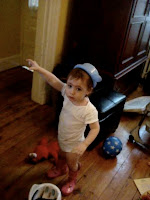 Lately, Hallie's been into hats. Not just regular hats (she is especially fond of putting on Sharon's Grover baseball cap backwards), but special hats, like pots, and pails, and occasionally swim diapers. While we're not holding out much hope for her wanting to wear hats once the weather turns cold and nasty again, we do think it's awfully cute. She's also all about wearing her bicycle helmet (and has remarked to us that her favorite Sesame Street characters always have theirs on when engaging in wheeled sports), but unfortunately, she prefers to wear the strap around her neck and the helmet part draped behind her, cowboy hat style. We're not so into this and often have to chase her down to save her from a choking hazard in the making.

The other thing that Hallie has been into a lot lately are her animals. I bought her a set of animal magnets the other day and her favorite by far is the "raff", which is her word for giraffe. I am guessing that she takes after Aunt Laura who adores giraffes, too.

And speaking of adore, yesterday morning we were lolling around with Hallie in the living room when Hallie walked up to Sharon and said "Mommy, love you!!!". That was the sweetest thing ever. She's been saying "love you" for a while now, but only doing it prompted, either when we say or sign it. That time it was totally spontaneous and it made Sharon's heart melt.

Finally, the other thing we learned about Hallie this week is that she can count to 15. Ami has been counting with her constantly, and so have we, and so have Sesame Street and Rachel Coleman. And one of Hallie's favorite things to do is to count as she comes down the stairs from the second floor to the first. Not coincidentally, there just so happen to be fifteen of them.

Overall, Hallie had a pretty nice week. She was reacting to something on Monday and Tuesday (we think one of the foods that seemed safe for her was cross contaminated---my vote is for the pear butter, which should have contained only pears and pear juice but is made on the same lines as a lot of other products that are not safe or for the goat ricotta since the same creamery makes several flavored varieties of the cheese that would not work for Hallie). But by Wednesday, she was feeling much improved and Thursday and Friday were great days. So 92 days vomit free so far, and hopefully still counting!
Posted by abby at 10:05 AM

Isn't that annoying with cross contamination? We are trying soy formula for Isaac's eczema and right on the label it says "Manufactured on dairy equiptment." What's the point then?!
Anyway, Hallie looks adorable as always and I am so happy to hear that more words keep coming!