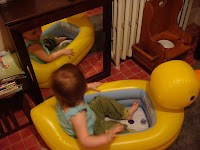 Hallie has always loved bath tubs and they don't really need to involve water, either (though she's a big fan of that too). Whenever we get a new tub (which has sadly been all too often because the inflatable tubs spring leaks really easily and no one can ever find the tiny little included patch kits when they do), she has to check it out by getting inside it, lifting it and throwing it in the monstrous clawfoot tub (the big reason we have her in a toddler tub at this point to begin with), etc.

Well, the ducky was an emergency purchase for us by Aunt Vanessa when our last tub not only sprung a leak but refused to stay inflated beyond pancake status. It was too small for Hallie from the outset, but it sure beat not having a tub for our nightly baths. So this week we replaced it with a Primo Eurobath (which is a great tub, though Hallie hates it...she wants to be able to kick at will and push forward so that she can reach the faucet, the soap dish, and anything else that might not be nailed down. The Eurobathhas positioners to prevent the baby or toddler from slipping forward that get in Hallie's way and as all of us who know Hallie know quite well, we should NEVER get in our girl's way when she wants something).

Anyway, we've left the ducky tub in the bathroom this week (mostly out of laziness) and Hallie's had a blast playing in it. Lately, she's loved mirrors even more than usual (she always has liked them, and needs to check out new accessories she's wearing in a mirror or mirror-like object like the TV or dishwasher front). And her favorite thing to do when looking in the mirror is to say "Hallie" and point at herself. Sometimes Hallie sounds like Hallie and sometimes it sounds like "Haddie" but we definitely know that she can recognize herself.

And she can totally recognize these kids, too: 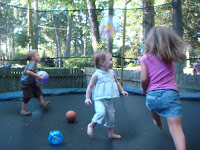 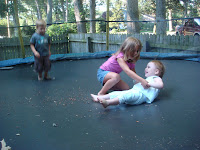 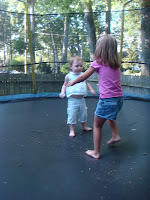 She may not be able to jump yet, but she sure as heck had a great time in the trampoline with the little cousins last weekend.

Ever since we got home, we've been checking out photos of the cousins this past week and Hallie loves saying "Ah---dam" and "Han-nah" and made us very happy since she pointed at a picture of Aunt Laura and said "Laura" as clear as day.

Right now she's headed back down to the shore to see the cousins and Grammy and Aunt Laura and Uncle Bryan. I need to go to DC for work tomorrow so I can't join them (but I can blog about Hallie to stave off my loneliness and how much I'm missing my girls).

Anyway, speaking about blogging, blogging helps a lot when you need to reconstruct a timetable around things. Sadly, the things around which we need to reconstruct timetables mostly seem to be food-related, and once more we are dealing with a mystery as to what is going on with Hallie. Truth be told, after a fabulous last couple of weeks in June and most of July, she's been having a hard time in August. After failing beef, having a hard time for ten days to two weeks after we pulled the beef, and then failing blueberries last week, we decided to suspend any food trials for a while. So we didn't add in anything this week, and still things are rough. The blueberry fail seemed unclear at best, but we decided to pull them in case they were what was leading to increased hiccups and then once-daily vomiting. Given that the reaction for blueberries seemed comparatively mild, we were pretty sure she'd clear up fast. Not so much. The vomiting has continued, and if anything seemed to all of us (Sharon, Me, and Ami) to be correlated to banana consumption. So we decided after much soul searching and great grief (especially since Hallie now points to bananas, and reaches for them when she sees them, and wants to eat them) to pull bananas on Thursday. Friday, sadly, was only a little better than Monday-Thursday had been (one of those days were vomit free, inching us ever so closer to the 100 day mark...we're now standing firm at 97 days that are spew free this year). She apparently retched and heaved for no reason, and then today, did the same thing. Now, on the face of it, today's vomit was related to her crying when I left the car (she hates it when I get out of the back seat to do an errand and crying often leads to spewing) but I think the problem goes deeper than this: she had been gagging on apples at both breakfast and lunch. This concerns me A LOT: is she suddenly developing problems with the few foods (was six, now five, perhaps headed to 4) that she used to tolerate? We are having trouble ensuring that she take in a balanced diet as it is and were pretty certain that 6 foods as a long-term kind of thing wasn't such a good idea, so 4 foods are even a worse bet where sound nutrition is concerned. Is she still healing from the problems she had with beef (this seems WAY too long ago) or is the problem bananas and needs to heal from taking in so many of those? And is this a banana allergy or intolerance (like, can she handle them in small quantities but not big ones)? Cell-mediated, non-IgE allergies are really sneaky and weird. We probably won't have answers....ever....to most of these questions. And the older she gets, the more despondent I become about her growing out of this stuff. We have no idea how in the heck she keeps growing the way she does (what is in that goat milk formula, anyway?) but we are grateful that she does; now we just want to figure out what we can safely feed her so that she keeps more food in (we'd love 'all,' but will settle for 'more'). Hopefully we won't drive ourselves stark raving mad in our search to figure out this Hallie food puzzle. But if we do, I at least hope that we manage to help her in the process.
Posted by abby at 8:36 AM