Unfortunately, I wasn't quick enough to get this one on camera (could this be, perchance, because I was walking around the living room feeding Lea, who prefers to eat on the go rather than with me sitting in the living room easy chair?) but here's a cute Hallie-ism of the day (that, as you will see, could have ended badly):
Around five this evening, or so, Hallie asked me for some chips (specifically for  "a big round one").  I got out the bag of chips and gave her one (no big round ones left, so she had to settle for a few broken medium-sized ones) when Lea began to cry.  I picked up Lea to walk her around and feed her a bottle when Hallie decided to climb onto the dining room chair and serve herself a few more chips.  She ignored my request that she get down off of the chair before she knocked it over and broke her head (or at least bruised some part of herself badly), and instead proceeded to grab a chip or two from the bag.  The second time she did this (again ignoring my request that she stop climbing), she said:  "Good job, Hallie!"  It was very cute, although obviously it doesn't pardon her from the reprimand she deserved for scaling furniture.
Anyway, Hallie was full of 'good jobs' this weekend.  On Sunday, we paid a visit to Gina and Jake to hang out with them and their whole posse of friends and family and check out the water slide (really more of a water park) that Gina had installed for Jake in their backyard.  Hallie was thrilled and demonstrated just how fearless, brave, and strong she is.  She grappled up the wall (kind of a cross between a ladder and climbing wall) to the top of the slide multiple times and enjoyed splashing into the pool below.  She couldn't get enough of that. 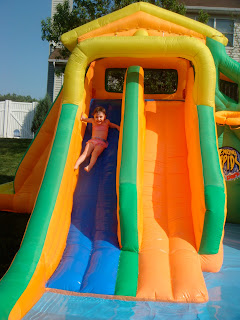 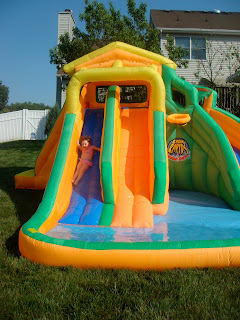 And she couldn't get enough of Jake, either.  She enjoyed lounging in his toddler bed (making us consider putting hers together for her before she gets too long for it), trying out his tricycle (Jake has moved onto a cool two-wheeler but Hallie's a bit short for it still, never mind that she's only just beginning to get the hang of the pedaling and steering aspects of riding), and especially taking his roller skates for a test run.  She was remarkably poised on these, so skates go onto her birthday wish list (and not only because she actually seemed to enjoy them either. Her new PT mentioned that having her roll around on skates would help build core strength and balance which might prevent her from falling when walking so much and might assist her in negotiating the stairs.  I think that play is always work for kids, but parents of kids who are developing a bit differently are particularly keenly aware that they are not just buying items to amuse their children but therapy tools).

Here are a few shots of Hallie hanging out with Jake and trying out his stuff: 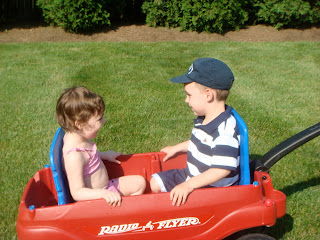 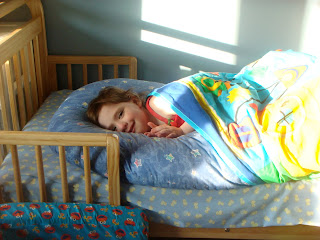 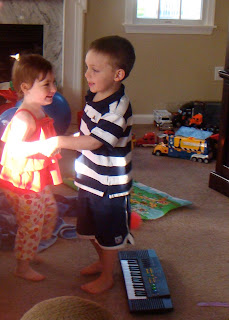 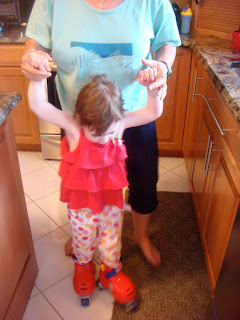 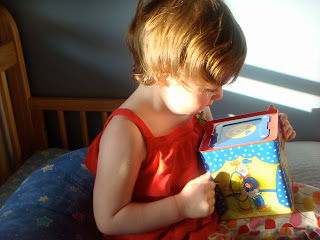 And here's a lovely picture of Gina, Jake, and Lea (or "Baby Lea" as Jake likes to call her): 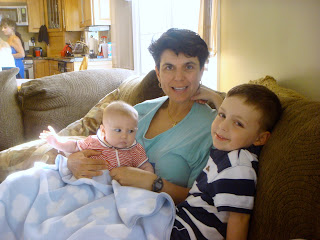 And, speaking of Lea, Lea is now chuckling and laughing a lot. I am assuming that she's doing so with us, and not at us (though the latter would make some sense, too!). Lea finds us very amusing, and is particularly enamored of Hallie. The feeling is quite mutual. Often, when Hallie wakes up, the first thing she does is say "Hi, Lea!" to her sister (ignoring the two of us until she wants something from us) and, today, after spending some quality time pretend playing with her various Sesame Street pals, she decided that they each needed to kiss Lea, one by one. It was very cute to watch her bring over Abby and Zoe and Elmo and Telly, one at a time, and put them close to Lea's face and go "Oh...Lea!" And tonight, after dinner, while playing the "turn-taking game" with us (this involves Hallie coming over to us, usually while we're still eating, and telling us that it is our turn to do something like dance with Hallie). Usually she just says, "Mama, come dance!" or "Mommy's turn!" but tonight she incorporated Lea into her routine and expressed that it was Lea's turn to pretend to be various animals. Indeed, she was more interested in Lea having her turn as a cow, moose, and dog than she was at involving us in her game. I sense that Lea will experience much more of this as she gets older and more able to participate in Hallie-directed antics.

Which brings me to the final observation of the day: Hallie was very much alpha girl at gym class today. The class was much bigger than usual and there were about fifteen kids there instead of the more typical ten. Most were newcomers to the class and not terribly familiar with the general structure, which involves a bit of free play followed by circle time, skill building, ball playing, bubble catching, and the goodbye song. Miss Kristen, who runs the class, had been out for a few weeks and its structure had devolved in her absence. So few paid attention to her attempts to run the show today. But not Hallie--Hallie was in tip top circle time form this morning. The second Miss Kristen made a move to get the rubber circles, Hallie was right behind her offering to help distribute these. She gave me one and then proceeded to help distribute the rest. Instead of sitting with me, she took her place right next to Miss Kristen and was thus the first to introduce herself. Usually she whispers "Hallie" very softly to Miss Kristen's inquiry about her identity, but today she shouted out her name. Then she went around with Miss Kristen and high-fived the other kids who identified themselves. She handed out the bells and really got into the routine (though she was a bit flummoxed about where her hip was located when Miss Kristen asked the kids to ring the bells on their hips). And she collected the bells and circles the second Miss Kristen asked the kids to do so and then Hallie proceeded to take my hand and the hand of another kid's mom during our little dance around the room and was happy to demonstrate her backward walking skills when asked to do so. All of this happened with at least ten kids and their parents still racing through the gym and jumping on trampolines and the like. Her friend Gage's grandmother, who was down visiting the class for the first time, was so impressed with Hallie that she called her the "class leader." I was very proud of how organized and together she was today (and this after no naps this weekend and getting home really late last night). And I was also impressed at how social she was with the other kids (saying hi by name to one little girl she knows from class whom she's also seen on the playground; offering balls to a little boy who is one of the youngest and shyest members of the class; playing catch with a third). It's moments like these when I think that she really is ready for preschool and that she'll be totally fine there.