First off, let me just say that we did not forget to celebrate Hallie's birthday. We are merely running a bit behind where blogging about it is concerned. I'd like to think that this is solely because life got in the way of blogging again (and it has; between preparing for Hallie's party, actually celebrating the big day, and then following it up with a stellar little sleepover by our friends Anne and Eliza Grace, who beat us to the blogging punch and already have an update out about this, it's been quite busy around here. But the other, less fun reason for our conspicuous lack of birthday blogging has to do with Hallie's latest eating strike, which has, until today, had us adults (me, Sharon, and the fearless Nadia) feeding Hallie for way too much of the day, which leaves far too little of the day (or night) left for blogging. Hopefully we have put an end to this, at least for the meanwhile, by putting Hallie back on periactin (an antihistamine which also happens to be an appetite stimulant), so we've been granted some reprieve. At least for now. (And for those of you still keeping count, we're now up to 112 spew-free days).

Birthday festivities got off to an early start when Hallie's first friend and NICU primary nurse, Ellen, popped by with three balloon--one in honor of Hallie's birthday, a second in memory of Olivia, and a third for Lea--and some cool gifts for our girl, including a DVD of Mary Poppins, which I am sure Hallie will really enjoy.

The kids really enjoyed the balloons and Hallie even let Lea play with hers for some time: 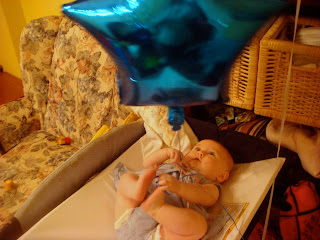 Of course, Hallie quickly commandeered all three of the balloons (and hence deprived Lea of her balloon-gazing; I am sure that the day is not far off when Lea defends herself from toy-and-amusement-snatching perpetrated by her older sister, but right now Hallie definitely has the upper hand in things). We did little on the actual day of Hallie and Olivia's birth, but we did have a grand time on the weekend. Hallie's party was held at a local kids' gym and most of her favorite people were able to make it to the festivities (even us, but just barely: while the car was all packed up with sodas and goodie bags by ten o'clock, it took longer than average to feed Hallie her breakfast. On top of this, Whole Foods' pizza chef forgot to make her the goat mozzarella pizza that I had commissioned, so all of us just barely made it to our kid's event. Alas, this is par for the course around here, but happily, it wasn't a big deal and everything else went off without a hitch).

The unfortunate thing about gym parties, however, and particularly those involving trampolines, is that the subjects which us parental types are trying to capture on digital media, are constantly in motion. So many of the shots I got with our camera (which doesn't handle indoor photography as well as I'd like it to even under the best circumstances) were none too fabulous.

Happily, Anne did get in some good shots. I managed to figure out how to copy the entire album into blogging from her Shutterfly account, but not individual pictures. If anyone remotely more tech-savvy than I am cares to guide me through this process, I'd love to hear how this can be done.

Eliza Grace was one of five micropreemies in attendance that day. Look closely at the slide show and you'll see several pictures of lovely Nina Fox. We were also lucky to have among us three other 23 weekers, Elizabeth and our friends Sydney and Payton, whom we know from the ICN at Pennsylvania Hospital. They were born about five weeks before Hallie and Olivia and their mom, Madaline, helped guide us through the NICU experience back in the old days. Suffice it to say that the micropreemie cohort was decidedly over-represented at our little shin dig, and with good reason.

We were also lucky to have lots of family at the event. Grammy, Aunt Laura, and cousins Sarah, Hannah, and Adam came down to help Hallie celebrate and big brother, Jake, helped introduce Hallie to the mysteries and wonders of being three. Finally, our event was made extra special by our friends: Charlie and Aaron's mom, Sara, who is very very creative, volunteered to make Hallie a lovely giraffe birthday cake that was also allergen-free (and burned herself quite badly in the process). The cake came out great, but Sara's arm is worse for the wear and we hope that it's feeling better now. And we were thrilled that Alex's mom and dad, Sheila and Brett; Sam's mom and dad, Elisabeth and TJ; and Taylor's two moms, Renee and Kim, were there to help Hallie usher in her big-kid status. (Hopefully I've not succumbed to horrible mommy-brain and left anyone out!)

Anyway, like I said, none of the pictures we took are much to write home about but we did get some quasi decent shots.

Here's one of Hallie, Hannah, and Adam on the trampoline: 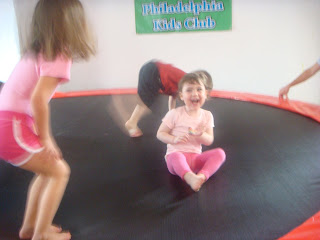 Hannah and Hallie are doing ring-around the rosy with Eliza Grace in the background: 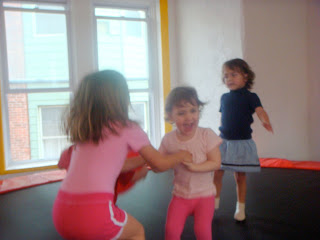 And here Alex is getting in on the ring-around-the-rosy action: 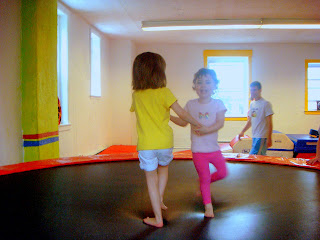 Basically, Hallie would do ring-around-the-rosy forever if she could. She's really into kids' dance and music routines generally right now (no doubt this is Barney's influence) and I suspect that she'd do pretty well at a dance class (were her schedule to permit this).

No birthday party would be complete without a blowing-out-the-candle event, and we did that twice at Hallie's party last Saturday (mostly because we were too daft to have cameras prepared to capture the event the first time around). 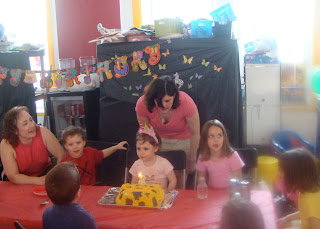 Hallie loved the singing and even managed to help blow out the candles. The practicing we did earlier in the week really helped her understand what was happening and what was expected of her. Of course, she needed no prompting or practicing when the time came to open her numerous presents!

Even Lea got in on the party action: she had a grand time being held by her big little cousins: 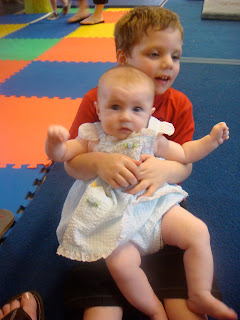 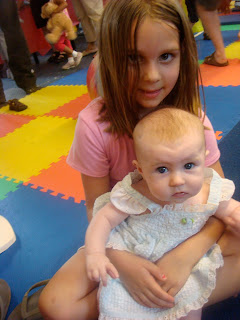 Anyway, a grand time was had by all and we continued our celebration with Anne and Eliza Grace, who spent the night. Eliza feasted on the tops of many Whole Food chocolate cupcakes and we had surf and turf, courtesy of our grill. The next day the girls woke up and had a nice bath together and we all headed out to the Please Touch Museum, where the kids ran around, played, and had a great carousel ride. 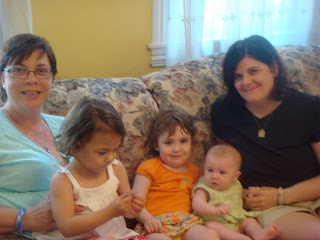 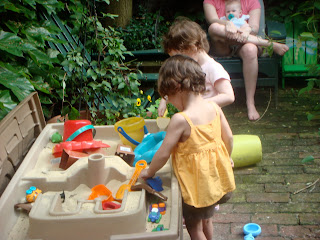 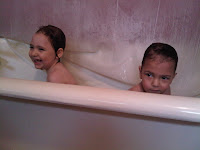 There's a lot of good stuff happening in Lea's life, too, and she is the subject of my next post (hopefully to be composed some time really soon!)
Posted by abby at 9:38 AM

Happy (belated) birthday, Hallie! Looks like you had a great party!

Happy Birthday to Olivia too. I am sure your sweet angel had a wonderful party as well.

It sure looks like everyone had fun at the big party.

I think that it is so great that you guys (and Hallie especially) hang out and see micropreemie friends. In that circle being a micro is NORMAL! It includes her in the group, rather than excludes like it usually does.

Sure makes me wish we lived closer to Philly!