Game 1 of the Division Series was amazing (I got to watch most of it while Lea napped and Hallie was in preschool); Game 2 was less so (for a while there I thought we were going to pull it off, but Cole Hamel's pitching was uninspiring and our offensive play was lackluster). I was all geared up for Game 3 tonight while holed up here in my mom's apartment in New York. It was not to be, though: the game in Denver was snowed out. This is hard to believe given that we're only a third of the way through the month of October but one can only hope that the Phiting Phils benefit from this extra bit of rest.
Mom is doing much better, but is still in a pretty bad place. The oxygen is gone; she is still on an orogastric feeding tube; is trying to but is unable to speak; and has minimal movement on the right side. But her eyes were open for most of my visit with her today and she seemed to understand most of what I was writing to her---she has severe hearing loss so I write her notes instead. Time will tell what happens. She will have a swallow study on Monday that will determine whether it is safe for her to eat and what consistency food she can eat. And Physical Therapy will be by to do an assessment. I am hoping that, even though I will have to phone in to get the details concerning the results of all these tests, the doctors/nurses will realize that I actually do understand the medical stuff that they're doing, etcetera, and that they don't try to dumb things down for me.

I'm still uncertain what the larger game plan entails but I strongly suspect that the attending physicians were resistant to the very idea of developing a game plan given how grim the situation seemed this time last week. But now it does seem like my mom is in it for the long haul...
Anyway, back to the Phillies. The girls were all decked out in their baseball finest this week and I got a few (relatively) cute shots of them: 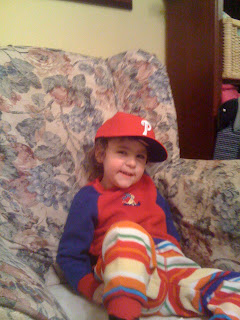 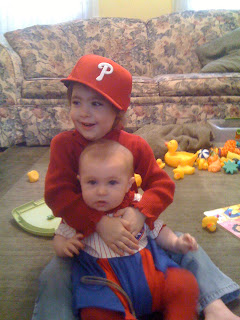 In this next shot, Hallie is giving me the goofy grin that she likes to make whenever I tell her to say "cheese" (and she decides to comply, which is somewhere between a quarter and half the time). 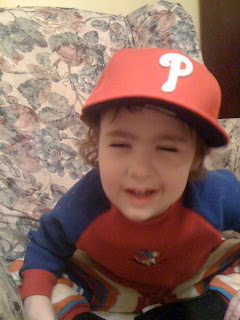 Hallie was very thrilled when I bought her the baseball cap she is wearing in these pictures on Monday after preschool. It is harder than it should be to find toddler/preschooler sized caps on South Street (the entertainment district close to where we live) but, after checking at a few stores, we were directed to one that had a nice array of Phillies head gear. Surprisingly, the store actually had her size (very, very small youth) in stock and the hat fits her perfectly. And she is so very cute when she says, upon prompting, "Go Phillies!" She needs no prompt when she declares that she is "Baseball Hallie!"and grabs a chopstick, drumstick, or just mimes hitting a 'baseball' (which is variously a nubby Gertie ball, a small hacky sack or a beach ball) that I toss her way. Whenever she "hits" the ball, I make a huge deal out of it and she comes running over to me to give me a hug. She may be the only child who grows up thinking that regulation baseball is played this way.

Speaking of baseball and the Phils, I was thrilled when Sharon told me last week that we won the United Way raffle for two tickets to the luxury box her architecture firm owns at Citizens' Bank Park (which her firm designed) during the 2010 season. That is going to be a very fun date! But post-season 2009 remains to be completed and hopefully our Phils have a Phiting chance.
Posted by abby at 8:00 PM

I know it is hard to love the Mets, but could you at least teach Hallie to be compassionate to Eliza when she shows up wearing a Mister Mets head?

Your girls are so beautiful! I cant get over how fast little Lea is growing up and how Hallie seems to adore her! You guys are such great parents! I have a Leah (I know different spelling) on the way and hope she is as cute as yours!