Today was the big Halloween parade at Hallie's preschool. It was kind of a madhouse and a lot of the kids (including Hallie) were a bit perplexed about why their parents, who had picked them up at 3:00pm, were dropping them off again at 4:00pm. From what I understand, there was general mayhem in the classroom as the kids were lining up to come outside and that the tears that some kids were shedding were pretty infectious. While the crying kiddos included Hallie, briefly, her tears were about having to give up her bottle three blocks from school -- since I draw the line at allowing her to have it anywhere near 'campus' -- and not about being dropped off again by me.

Anyway, the scene in the schoolyard was equally chaotic; tons of parents and grandparents and siblings and assorted others showed up to witness the annual event and everyone was jockeying for the best view. Being short, it was a bit hard for me to see, let alone take pictures, of the parade. But the kids hung out to trick or treat at the church that leases space to the school and to run around the graveyard. Yes, the graveyard. Very Halloweenish and very cool from a historical perspective.

The pastor and his family had decorated the graveyard (which is going to be the backdrop of a large dance with live rock music tomorrow night) and, along with various blow up ghouls and ghostly characters, they had liberally peppered the expanse with small pumpkins in an effort to create a sort of pumpkin patch effect on the premises.

Hallie was enthralled with the pumpkins but not with the sort of display that the family had created with them. So she set about changing it: 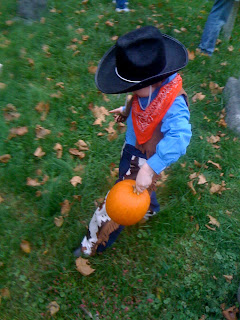 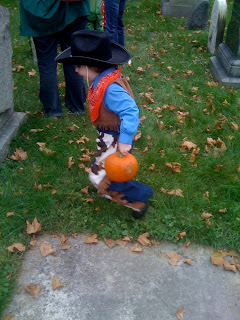 Some of the pumpkins were a tad out of reach but this did not stop our girl from her mission: 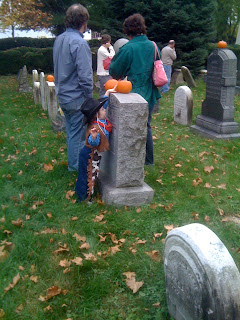 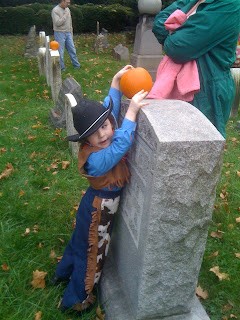 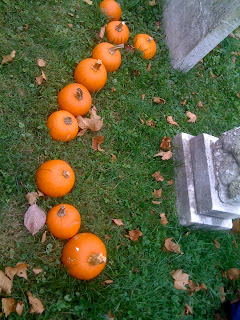 And some of the kids thought that Hallie's plan was a really, really excellent one, so they joined in and helped advance her architectural endeavor: 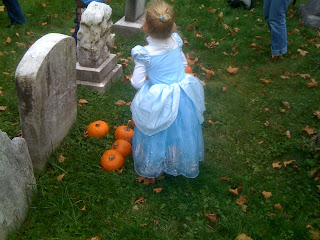 Of course, others were very disturbed by this and set about trying to put the pumpkins back where they came from. Sadly, I was unable to get a shot of the industrious little boy who spearheaded the return-the-pumpkins-to-their-gravestones movement.

But, ultimately, Hallie prevailed. This is the masterpiece that she created: 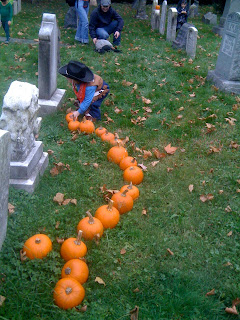 Hallie, having reasserted order in the disorderly world, then set about running, playing, and chasing after her friends. She had a great time, even if her idea of play and order are a bit different than that of some of the other kids. And the other kids adore her and she adores them, and in the sweet way that preschoolers often have, they don't seem to care if she is a bit eccentric and not so good at communication (yes, I still need to write that post....really, I am working on it and intend to have it done before November begins. At least that's my intention). But I am pretty sure that, had our developmental pediatrician been lurking in the graveyard at today's shindig, she would have had no doubt that placing Hallie on the autism spectrum was spot on.

My sense is that Hallie's pumpkinhenge construction was related to the fact that she was completely overwhelmed by the Halloween event at school this evening. First of all, the atmosphere was one of chaos involving about sixty kids and easily a hundred strange adults. Not only that, but all the kids were dressed up and did not necessarily look like themselves. That was probably a bit disconcerting to Hallie. Second, there was very little structure to the event. Hallie had no idea what was expected of her and, given that I had no idea what to expect either, there was no way that I could devise a social story for her that might explain the event for her beforehand. Next year, this will be a bit easier. And hopefully I can get her teachers to provide her with a social story in advance of other similar events that no doubt will be held for other upcoming holidays. Third, the parade itself was followed by a long session of free play. Hallie does a lot less well at free play than she does at structured play. So, all of this amounted to a disorderly universe for a kid who often feels out of place. What better way of responding than by building pumpkinhenge? This helped her feel more in control of things and, after the structure was built, Hallie could go on and play with her friends and enjoy things more fully. In other words, Hallie needed to build pumpkinhenge in much the same way as she needs to jump on trampolines/chairs, needs to roll around in her stuffed animal collection, and needs other forms of sensory input. Her body works less well than those of other kids and she finds these activities to be self-organizing and self-regulating. Lining up pumpkins involves a lot of heavy work, joint compression, and proprioceptive activity. So, if this is what my kid needs right now, so be it. There's nothing wrong with lining up a few gazillion pumpkins. Plus, it's probably a whole lot of fun. Heck, next time I'll probably help line them up with her and turn it into a very nice Floortime activity.
Posted by abby at 1:15 AM

P'ito loves lining things up - he would have been Pumpkinhenge chief engineer #2 if he'd been there. And he isn't a spectrum kid at all - just obsessed with lining things up. Hallie is so damn cute!

Sometimes a pumpkin arrangement is just a pumpkin arrangement. Lining things up is a time-honored toddler/preschooler form of play. For variety, sometimes Alex sets things up based on the pattern of our rug (random things, like pieces from a board game or cards), but lines are always good too. I think it was actually fairly age-appropriate play.

This is a school yard or an actual cemetery? If it is the real deal I can't wait to see if they take the kids to the "real" North Pole to see Santa.