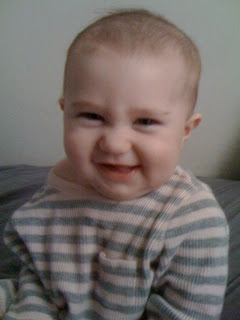 Lea is turning into such a little imp. This is the look she gave me when she woke up Friday morning (well, barely morning: she likes to get up around 11am most of the time. She takes a page out of Sharon's book in this respect!). She was obviously in a very good (and exceedingly cute) mood. I couldn't help but take a few shots of her: 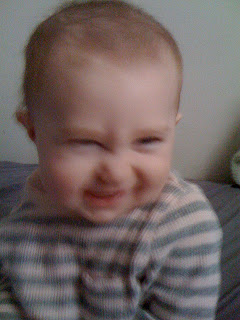 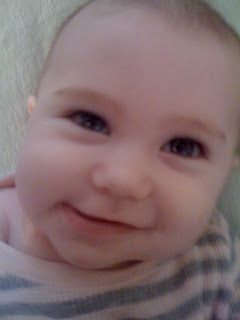 What you can't see in these pictures are Lea's bottom two front teeth, which have no broken through and are becoming visible to the naked eye and very palpable to those of us upon whom she likes to gnaw (I dare say that Sharon has things worse off than I do in this respect).

Lea has been developing in other important ways, too. This past week, Lea said her very first word, a very appropriate "uh-oh." She doesn't know what it means yet, but she finds it hilarious to repeat and now say on her own. And she's also begun to initiate games of peek-a-boo with us. She is an incredibly engaged little girl who is growing increasingly more interactive as the days elapse.
Lea has also been pulling to stand on everything and wants very much to stand on her own and walk from one holding-on-place to another. We brought up some of Hallie's old toys to give her new and more interesting things to play with and new pulling-to-stand locations. As expected, she loves her Fisher Price piano and Leap Frog table. 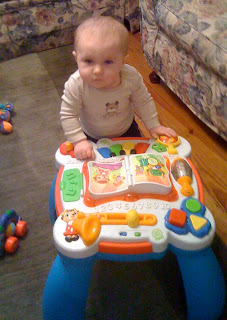 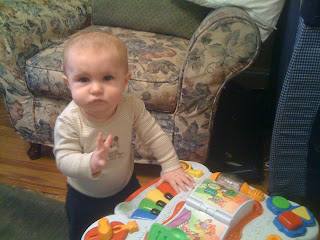 Of course, Lea's favorite activity involves watching, and then doing, whatever it is that her big sister is up to. Hallie's favorite spaces at home is the corner of the living room next to the couch and behind the couch; Hallie likes to stash her favorite toys back there (it's also where the play hut and the tunnel live, making the space even more sacred) and it contains a nice big subwoofer upon which Hallie likes to climb and dance to her tunes). So Lea has decided that she needs to crawl into this nook every chance she gets and then peers out at us and flashes us a great big grin that says, "Look, I did it!"
Lea also goes after Hallie's toys and, for the most part, Hallie is a good sport about it (as she is about most things involving Lea, whom she adores). We're trying to teach Hallie to trade toys with Lea when Lea when Lea grabs hold of an especially prized possession. This sometimes is a bit of a struggle, and Hallie will exclaim "mine, Lea, my toy!" but does pretty well and is also quite fond of saying, "Here Lea, here you go!" Of course, there have been a few altercations over the Casio keyboard when Hallie is playing her piano and Lea makes a bee-line over to it and starts banging away. I suspect that it's pretty hard for a three year old and an eight month old to grasp the concept of duets, but we're working on it.
Lea is also getting pretty huge. She's tried a few new foods this week: sauteed ground chicken crumbled quite finely, which she seems to like; diced soft cooked carrots, to which she seems indifferent; vanilla Stonyfield farm full fat yogurt, which we think she likes, at least sort of; and mac and cheese, which she definitely grooves on. She is very, very fond of graham crackers, cheddar bunnies, pretzels, and toast rectangles slathered in buttery dairy free spread (left over from Hallie's breakfast). And she continues to love her bottle, but only if she gets to grab it, tip it up, and hold it herself. Our little imp definitely has an independent streak.
That's about all I have the energy for right now, but check back for a long update on Hallie's very excellent week...
Posted by abby at 1:28 AM

Lea is one seriously cute kid. Steak is in her near future. I expect to see her peeping through your screen door next summer saying "I'd like mine medium au poivre."