Eating at the Table 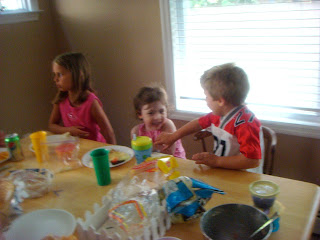 Still working on my mammoth preschool post, and several others. But meanwhile, we have some breaking news: Hallie is no longer eating in front of the television but at the table, with her family. We started this trend this past weekend, when we were down at Aunt Laura's and Uncle Bryan's house to visit with the cousins and rest of the family and take Hallie to her hippotherapy evaluation. We decided that, enough was enough: the TV is a major distraction; takes away from joint attention with real, live people; protracts mealtime in a deleterious manner; and is downright annoying. Plus, it really wasn't helping any more--she ate no better in front of the television than she might otherwise have done (which is to say, she eats poorly in both cases). So we fed her with her cousins at the table for most of the weekend. At least this way she'll have family meals.

I have to say that, so far, so good. Meals are shorter (around 45 minutes), more enjoyable (most of the time), and more normal. Plus, we get to eat (even if it's just a bit of the same stuff that we're feeding Hallie). We've moved the high chair to the table (we still need to use this or else we end up with meals that consist of four or five bites) and set up our second high chair for Lea (who is eating rice cereal with us at dinner).

We do end up reading with Hallie or coloring, but at least these are joint activities. Hallie can't really have a conversation with us that is substantive; we've tried asking her about her day, but her capacity to discuss things that she might have done out of context is limited, to say the least, and all parties end up feeling frustrated. We try hard around here not to make mealtime (or speaking, for that matter) more frustrating than it already is for Hallie.

So far, save some behavioral stuff at the tail end of meals when Hallie really has had enough of sitting there (even if she hasn't eaten as much as a typical kid might at a meal), we've had no major meltdowns. I've started having Hallie take responsibility for cleaning up her food. She won't use a plate, but she will replace all of the leftover food on her tray into the appropriate plates or dishes and help wipe herself and her tray down. And if she does pitch a bit of a fit, she needs to tell me that she is sorry. The rule is: we'll try to respect her (within reason, so, no a two bite meal is not good enough) and she'll try to respect us. At least we've got the rudimentary building blocks of etiquette even if she can't really handle spoons too well and likes to use her fruit purees (of which she is eating less and less these days) as a sensory tool (think fingerpaints).

We're hoping that the feeding therapists at Thomas Jefferson University, where we just completed yet another feeding evaluation, can help us in this process. They take the absolute opposite approach that CHOP does, which is to say that they are not using a behavioral approach (which often is tantamount to force feeding in our estimation) but a more child-directed approach, to improve mealtimes. We'll find out some time next week when they can work us in for weekly sessions.

It's sort of funny and sort of sad that it's so hard to find time in Hallie's schedule these days. She's the quintessential over-scheduled child, but rather than partake in T-ball and soccer and dance and gym classes, she goes to occupational therapy, hippotherapy, feeding therapy, and DIR/Floortime therapy, on top of her 17.5 hours per week of preschool, 3.5 of which are devoted to OT, speech, special instruction, and theoretically PT (but not actually, since there is no physical therapist who can visit her yet and the folks that run the 3-5 program are gleefully violating Hallie's IEP...presumably they will be doing so a bit less gleefully when I get back in touch with the nice lawyers at the Education Law Center with whom I have been having some interesting conversations of late...). Anyway, we were considering adding in private speech therapy and a social skills class on top of this, but, frankly, there's nowhere to add these. Besides, as Steve, Hallie's Floortime therapist, asserted the other day when I was discussing this with him at the beginning of Hallie's session, it's not clear that Hallie is ready for social skills classes yet--she needs to be able to fluidly complete 50-60 'circles' of communication (not just speech but gestural, body language, etc) in order to get the most out of a social skills group. Hallie can currently complete 20-30 on a good day, but this is still a lot of work for her and, so, what we need to do right now is focus on getting her to another, higher developmental stage.

Which brings us to issues related to preschool, and that needs to be in another post because it's already plenty late around here and I need to get some sleep before I begin my own over-scheduled day in a few short hours.
Posted by abby at 1:33 AM

After visiting Eliza's preschool yesterday I added up her weekly hours of "work." If she were an hourly employee she would be getting plenty of time and a half.

Hopefully one day the biggest scheduling issue will be soccer versus gymnastics.

Hippotherapy sounds AWESOME. But maybe I'm not picturing it right...

Eating at the table is such a huge step! Congrats!