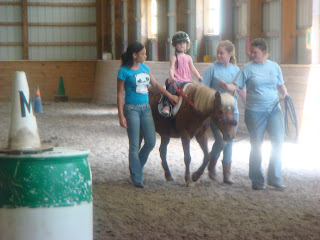 It was perhaps a fortuitous coincidence, but this spring, Megan, one of Hallie and Lea's two older cousins, decided to volunteer at the Atlantic Riding Center for the Handicapped (ARCH), which is located not far from Aunt Laura and Uncle Bryan's house in Northfield, NJ. She is in love with the place and has logged tons of volunteer hours there and has gotten to know the horses, trainers, and therapists really well.

About the same time, we decided that it would be a good idea to start Hallie in Hippotherapy. We've read great things about how much it helps children (and grown ups) with all sorts of physical, cognitive and neurological challenges. Learning to ride, and performing therapy while riding, not only assists in core strength and balance, but also in executive motor planning (you learn to guide your horse and command him or her to go, stop, etc), communication (you must use language and/or gesture/body language to communicate messages to the horse and in the process, you learn that language isn't just for labeling but for getting a message across to someone or something), empathy (caring for your horse teaches you this), sensory integration (you need to use all of your senses, work on bilateral use of limbs and cross the midline a lot), and the like. For more on some of the benefits, see this brief description of hippotherapy. And, while it might sound as if it's an exercise in riding hippopotami, indeed, it's all about riding horses, as "hippos" is the Greek word for horse.

Part of the reason the idea was oh-so-appealing is that Sharon loves horses to such an extent that, when she was in high school, she bought one for herself. She had asked her parents to buy her one, and like most sensible parents in most places and times, they responded with a big, fat "no." So Sharon worked extra hours, saved money, and bought a friend's horse when it turned out that her friend could no longer keep her. Sharon loved Candy, her horse, and worked in the barn at fairly menial tasks before and after school to earn its board and would lug (with the help of her dad) food and hay and such to Candy's stall. She even slept alongside Candy in her stall more than once. While she never took riding lessons, teaching our kids to ride has always been a priority for her (and consequently for me, even though I am from Brooklyn where we had very few horses and approximately zero horse farms). So, even though we never imagined that we'd be seeking out precisely this experience for one of our kids, we decided to ride with it, so to speak.

Two weeks ago, Hallie went down to ARCH for her evaluation. We were lucky to secure a much-coveted Saturday spot at a decent hour (12:15) that will allow us to get Hallie fed (no mean feat, as anyone who reads this blog knows by now) and off to the ring. During the summertime, at the very least, we'll try to go down on Friday nights each week so that Hallie and Lea can spend time with their cousins, aunt and uncle, and Grammy. This is also a pretty convenient way of avoiding shore traffic.

Hallie took to riding Cocoa, the pony upon whom they started her, like a pro.
While she spoke very little and her voice was even quieter than usual (this tends to be the case whenever she is in public and outside of her comfort zone), she nevertheless learned quite fast how to use the basic commands ("walk on" for "go" and "ho!" for "stop") and held her reins really nicely. She also named the colors of her reins, called out the letters on the cones which held posts from and to which she was asked to transfer rings, and the like. Her posture was great and she especially loved it when she got to trot Cocoa. She also really enjoyed nuzzling Cocoa at the end of the assessment and leaning in to give him a hug. To the extent that she talks (which is not much), she talked about the experience for the next week ("I riding horsie") and called her pony by name and was clearly thrilled to see Cocoa last Saturday when we returned for her first real session.

Her therapist, Betty, thought that Hallie did so well that she upgraded the reins to more challenging ones. Megan says that Betty thinks that Hallie is already quite a bit better than many of the children who have been riding for a while and it makes us happy to hear this (not that we are competitive; it's more that she seems to have a certain degree of natural athletic ability and certainly athletic drive, which makes us happy). Riding Cocoa (and the horses to whom she will graduate as she gets bigger) will be really good for Hallie's self esteem. For a kid who is socially anxious and aware of her differences from other children already, this is a good thing.

The few pictures we have of the assessment and session are pretty crappy because the light was awkward (she used the indoor ring but it was open to the outside and hence we had the worst of all possible filming conditions). On top of this, we were pretty far away from her and our camera isn't equipped with a telephoto lens. But we'll try to give Megan a camera to take some shots next time so that the blogosphere can see how good Hallie looks astride a horse.
Posted by abby at 12:53 AM

I'm thrilled Hallie is riding - it's been a wonderful experience for our kids, too.

WOW...that is just sooo cool! Someone once mentioned riding as therapy for Kenny, but I never really looked into it...now I am going to have to! Thank you for the information!
I also want to let you know that I want to give your blog an award. I want to tell you that I admire your strength and courage through everything that you all have been through (and are still going through). You give me hope and inspiration. So please stop by my blog to pick up your award.
XOXO