One Cute (and Very Funny) Kid 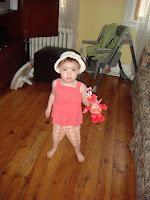 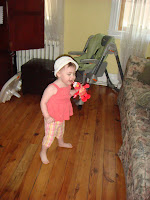 Hallie is a very funny little girl. Right now she is all into her hats, as long as you don't insist that she wear them in the sun. She loves to put on Sharon's orange Grover cap that we purchased last summer at Sesame Place. First she puts it on forward, and then backwards and it's quite big on her little head (Sharon has a tiny head, but Hallie's is even smaller. We know she's got a lot crammed in there, but her head is on its own growth curve, which just kind of, sort of, depending on who is doing the measuring hit the actual chart at about maybe 10% on a good day and if you hit the right bumps and stuff). So the cap obviously falls down over her eyes, but when she is wearing it backwards, she likes to peer through the crescent-shaped hole made by the strap that adjusts the hat's size. She also quite enjoys wearing her brand spanking new tricycle helmet (we had to purchase the one for 1 year olds since the age 3-5 size was far too big on her) around the house. Hopefully she'll enjoy wearing it while she rides her trike too, but we're not counting on this!

Hallie also LOVES to brush her teeth with me....about fifty times a day. She has to have 'some' put on her toothbrush (the 'some' in question is toddler toothpaste) over and over again during each tooth brushing, so the Oral B stock should be going up any day now.

And she loves to call out 'doggie' and 'baby' (she pronounces the former "DAAAAAAWWWWW-GEEEEEE' and the latter "DAY-DEEEEEEEEEEE") everywhere we go. We live in an urban downtown area that is a fine mix of residential and commercial establishment (I love our neighborhood--two grocery stores, an organic food store, the Italian market and two once-a-week farmers' markets, plus a slew of cafes, restaurants, and five toddler parks all within ten blocks of home). There are always lots of dogs and strollers around and so Hallie gets to exercise her right of free labeling speech quite frequently. The other day, though, a postman was about a block and a half ahead of our stroller (Hallie is still pretty far-sighted) and Hallie screeched out, in her Grouchetta (Oscar's female friend from Sesame Street; we've decided that it is most likely that Hallie will sound like her when she grows up, largely due to the vocal cord paralysis) voice: "DAYYYYYYY-DEEEEE" and I could not disabuse her of the notion that the postal cart the postman was wheeling did not, in fact, contain a baby.

The other thing that Hallie now does is call bubbles "ouse". I am not sure where she got this, but I pretty much think this is a lazy toddler thing. She demands "ouse" about thirty five thousand times a day and is trying to control the "ousing" process by holding the bubble container (we own seven million of these) and even forcing me to lick the wand....yuck. It's gotten so bad that I've begun calling them "ouse" (a big no-no) but the word "ouse" is very cute (as is any word that slips out of my daughter's mouth) so what the heck. She knows that they are bubbles and even says bubbles when I insist on it. Let her be two is what I think about the whole thing.

And two she is. No real tantrums. Just an incredibly independent little girl who is growing more independent every day. She loves to approach kids on the playground and throw balls at them or interact with them in other ways (she loves saying "Hi!" and "Bye!" to all and sundry). And the other day, during speech therapy, we were out in the nearest of the aforementioned toddler parks, which was filled with kids (from a local daycare or two). As per Hallie's routine, we swung (well, I pushed) first, and then she signed and said (clear as day) "All Done" and "Up!" I took her out of the swing and she made a beeline for the slides, which were at that moment occupied by 20-40 (you sort of lose count when there are so many people under four feet tall) toddlers and preschoolers. I was a bit apprehensive about whether our girl would be able to muscle her way into the fray, but darn it, I was wrong: she negotiated the toddler throngs with aplomb, waited until other kids slid down or climbed up the slides, and took her turn. And then did it again.

Speaking of age-appropriate behavior, Hallie is also alleged to have eaten 6 SLICES of fresh apple today. The intrepid Ami (whom Hallie is now calling by name) peeled and sliced up an apple for Hallie today, and Hallie fed it to herself. No gagging, no choking, no vomiting (we are now, incidentally up to 74 vomit-free days in 2008; there was a minor setback this weekend when we fed her Terra Yukon Gold chips. She is either allergic to sunflower/safflower oil---we always use canola or olive for her---or they were cross-contaminated, probably with rice starch). Anyway, we are eager to see this for ourselves, and even more eager to be done with jars of food. Hopefully this will happen in 2008, or at least before Hallie turns 3.

Anyway, it's been a good couple of days for the kiddo, and we are astounded, impressed, and amazed at how well she is doing and at what she knows and how she shows it.
Posted by abby at 1:39 AM

TOO cute! And so awesome to read the news of the speech and apple slices! What amazing progress she is making! Yay!