So we're doing a beef challenge this week with Hallie. It would be excellent to have an additional protein source (her only protein source thus far being goat milk products; she's great with these, but her diet doesn't afford her a lot of variety). She doesn't seem to like the taste of those little jars of beech nut baby beef terribly much (can you blame her?) but has done okay on the two ounces of it that she's had so far (one yesterday and the other today). So, after a bit of research on Applegate Farms (an organic brand carried by Whole Foods) that yielded information about a very good set of policies concerning their lack of use of gluten, their dedicated practices to avoid cross contamination with dairy products, and the like, I decided to pick up a package of their organic hot dogs tonight and try them out on Hallie. Worst comes to worst, I figured, we'd actually eat these (unlike the many jars of rejected baby food that we have stacked in our cabinet). We do like our hot dogs around here (pretty occasionally, but still) and I insist on organic ones, and since I do most of the shopping, Sharon has to put up with these (which actually are quite tasty) in lieu of her preferred Oscar Mayer ones (side note: Hallie's pulmonologist *is* actually Oscar Mayer...grandson, I think, of the lunch meat-hot dog guy, and a fabulous doctor all around. I'm not sure if we'll see him or someone else on Monday for our 6 month checkup that is about 3 months late, but we are looking forward to hanging out with the pulmo fellow, Liz, whom we actually miss. She loves Hallie, and the feeling is quite mutual. I am sure that Liz will be surprised at how big Hallie's gotten).

Anyway, back to the topic at hand: I brought them home, boiled up about a third of one, skinned it, let it cool, and chunked it up pretty small. We weren't sure what to expect because Hallie gave me the mother of all food averse I'm-not-eating-no-way-no-how-you-cannot-make-me-so-there tantrums last night. So much so that I gave up (trying not to show my exasperation) and handed over the feeding reins to Sharon, who managed somehow to get four 'sticks' of goat mozarella, two slices of banana cut up into sixths, and a few sticks of pear into the kid over the next hour and a half. It's very clear to us that our toddler knows how to chew and can chew and swallow safe foods, but that she is as stubborn as a mule and that food is her controlling mechanism of desire (or lack thereof), probably because of her long history of hating it and it hurting her. In any event, tonight she was pretty good and, once she deemed the hotdog both safe and tasty, chowed it down pretty nicely. A couple of chunks did end up in her high chair, but this appeared to be more related to toddler lack of eating coordination than to an effort to hide and bury them and fool us on her part. (It is pretty interesting that she inspects her food the way she does. Her initial response to chunks of food that do not appear to be french fries or potato sticks is to say 'all done' and swat at and clear them. But she stopped doing this with the hot dogs once she actually tasted their yummy salty goodness and realized that this was indeed what the famous pigeon was talking about when he found a hot dog and deemed it a taste sensation and splendor in a bun. Just hold the bun for Hallie, unless of course we can figure out how to make a bun from potato, goat milk, pears, apples, bananas and prunes or some subset thereof).

We'll see if Hallie's pro-hot dog stance continues tomorrow and how she fares with beef more generally. She usually begins reacting to a food to which she turns out to be non IgE allergic by the third or fourth day of a trial, and tomorrow is day three. We certainly are hopeful that she is not one of those rare FPIES kids who is so allergic to cow milk that they are also allergic to the cow that produces it.

In related news: today is day 82 of the year that is vomit free, and the only day in the past 10 that she did vomit was Sunday, when she hit her head on the wooden frame of the futon. This is spectacular (not the head hitting part) and gives us great hope.

Her language is also progressing nicely. Tonight she brought her Baby's First Colors book over to Sharon and both signed and said (quite clearly, to us, at least) "colors." She says "upstairs" when she wants to go up, and "outside" and a bunch of other multisyllabic words. And she is internalizing the need to be polite. Now she almost always says and signs "Please" (she says "Pleasy") if she wants something and without fail says and signs "thank you", which sounds much closer to how it is supposed to sound---it used to sound like 't---oo" and now sounds like "tank-ooo". She has also been saying "hello" quite clearly into phones---both real and perceived---and yesterday evening had her first real phone conversation with Grammy. She said "Hello", "Grammy", "Doggie" and "Bye Bye" pretty much in that order. Grammy was quite thrilled. She is still probably only 25% comprehensible (maybe a bit less) to others, but this is quite impressive progress given that Hallie hardly babbled at all until November/December, had nary a word back in January, and only about 40 words or so at the beginning of June. Now she has so many words or word attempts that we've kind of lost count.

Hallie has also refined her sense of style. I call the first picture "The girl with the go-go boots" (her favorite item of clothing). Note that she is only wearing a diaper since she has become quite adept at removing her pants. 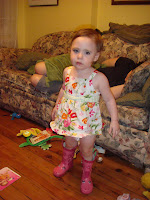 The second picture is Hallie's updated Russian peasant girl look. She insisted on undoing one of the straps of her Elmo/Cookie overalls and walked around with them that way most of the day. The rest of the day she decided that overalls were too much to wear altogether so she stripped them off and just hung out in her t-shirt. 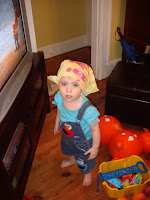 I have some pics on the camera of Hallie's impressive attempt tonight at body art (using washable markers; she's mastered taking off and replacing the flip top on her new ones, but still insists on using her teeth instead of her hands...does this count as fine motor skills?) but I am too tired and lazy to upload them right now, so these will have to wait until my next post.
Posted by abby at 2:06 AM

Ah the fun beef times! Our girl digs chick-fil-la grilled chicken..I know not organic but man oh man, she goes to town on that stuff..add in some waffle fries and you gotta meal!
Nina disliked hot dogs too. Weird since it seems all kids love them.

Great news on the communication front!

Amelia has been on to hot dogs lately...it must just be because of summer. But I feed her the ones that taste good, and are full of god only knows what. haha. She really likes hers splint into quarters lengthwise. This makes them much easier to chew and handle. Just an idea.

Keep up the great talking Miss Hallie, and we can't wait to see you someday on a fashion show!

Then again, in "The Pigeon Wants a Puppy," I get tongue-twisted and say "pigeon-loving puppy" half the time, so who am I to talk?

Hi! I just found your blog and love it! I have a 32 weeker. We are constantly dealing with eating issues too. Ben sees an OT once a week about them. He won't eat any table food that's soft but chicken and grilled cheese. I am going to go try hot dog this week!