Our kids woke up a bit later than most kids on Christmas morning.  On the one hand, I really appreciated this because it gave me time to clean up the mess that the reindeer had left on the front stoop from their none-too-neat carrot eating.  On the other hand, we were saddened that this late awakening was because Hallie had been up coughing for most of the night.  This, plus the fact that Hallie was burning up with a fever, worries us that Christmas-New Years 2010/11 may turn out to be a little bit too much like Christmas-New Years 2009/10.  (Fortunately, regular breathing treatments and tylenol seem to be doing the trick so far.  We are monitoring her respiratory rate, [40 and above is worrisome; Hallie's been staying at about 33-34 breaths per minute] fever, and hydration and so far she's not getting any worse.)
Anyway, the onset of this crud meant that Hallie was a bit more subdued than she likely would have been, particularly given her excitement level of the days leading up to Christmas.

But that did not stop her from exclaiming, "There are presents in my stocking!" when she saw the following sight:

And indeed there were, and lots and lots of presents under the tree, too.  And cookies that had been munched and chocolate milk that had been slurped, and carrots strewn around all outside our house.  There was also a lovely note from Santa on cute reindeer stationary that read as follows:
Dear Hallie  and Lea,
Merry Christmas! The elves and I had a great time this year getting ready for Christmas and we were probably as excited as you two were when the big day finally arrived.  I got Rudolph and his friends harnessed up for the ride and we were thrilled to dash across the sky and land at your house in Philadelphia.  We were so happy when we heard that you guys were going to celebrate Christmas at home with your mommy, your mama, your cat Zenny, and your grammy.   It’s wonderful that you were able to pick and decorate your very first live tree.
News travels fast to us at the North Pole and we were so happy to hear about all the great things the two of you have done this year.  Hallie:  You became such a big, independent girl, almost overnight.  You got potty trained, began drinking milk out of a cup, and learned how to write your own name and read lots and lots of new words.  You also turned into such a great older sister who is always looking out for little Lea.  And Lea: you became a toddler this year.  You learned how to walk, gave up the bottle, began talking really well, and can do lots of things for yourself.  You are a great sister for Hallie and a wonderful mommy to all of your sweet little dolls.  Your family and teachers are really proud of both of you.  Here at the North Pole we had no doubt that you guys were nice and deserved to get those cameras that you told me you wanted the other day.  We also left you a few other trinkets and sweets in your stockings to make your Christmas extra special.
And speaking of treats:  thank you SO MUCH for the cookies and milk.  How did you guys know that chocolate milk is my favorite?  And Rudolph and the other reindeer enjoyed munching on those carrots you left them.  They get awfully hungry pulling my sleigh and really needed that snack.  They apologize for the mess they made, though.  They were in an awful rush to eat them because we have a lot of houses to visit still tonight.
And that reminds me that I must be off now too.  Have a very merry Christmas! 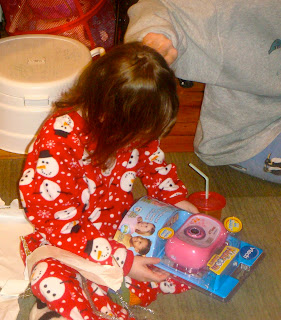 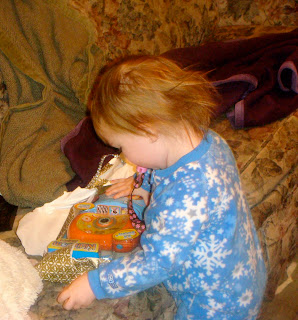 Both of them spent a lot of the rest of the day (and the day after and the day after that) taking pictures of anything and everything.  They were constantly telling me, Sharon, Grammy, and our cat Zen to say "cheese" and took lots of pictures of parts of our bodies, the floor, the ceiling, and their own limbs (knees and toes and not just fingers).  They also took pictures of some of their favorite playthings.  Here, Lea has posed her babies for a shot: 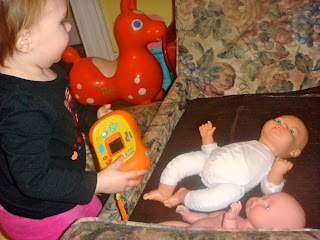 And we have some very good pictures of Kai Lan that have been uploaded to my computer: 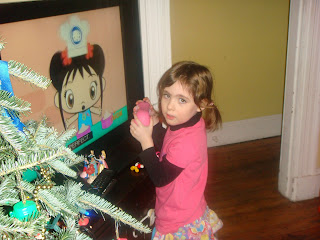 Lea even tried to teach her babies to use the camera, too: 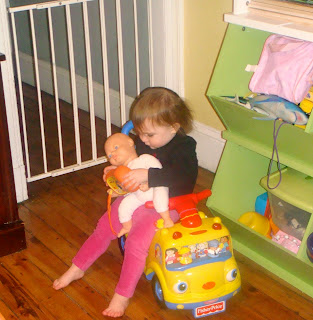 Speaking of babies, the girls got lots of new ones from their grammy and us.  Hallie got a Baby Alive who constantly exclaims "I'm hungry" and likes to eat bananas (and hence hardly resembles her new owner; fortunately Lea takes care of this baby much of the time).  And Lea got a baby who likes to coo who came with a very cute outfit but who, like all the other residents of our baby nursery, has been stripped down to her birthday suit by the girls.  Lea also received a baby for the bath and a special tub and all the relevant accompaniments.  She had a great time washing and cleaning her bath baby this afternoon.  Finally, the girls got a new cradle for their babies.  This has led to some interesting "games" of tug of war around here and we've surmised that, even though Hallie usually ignores her babies, now that Lea is so very interested in them, her own curiosity (or is it desire to remain the alpha kid?) has been piqued.  Suffice it to say that we will be working on the concept of sharing in the new year. 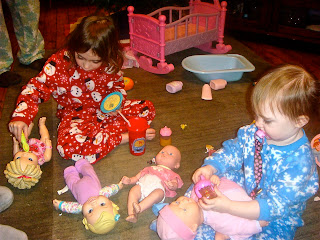 The kids also got a lot of ornaments.  Hallie's included were Lucy and Charlie Brown, Dora and Diego, and a Dr. Seuss Green Eggs and Ham ornament (this is currently one of Hallie's favorite books).  Lea stash included Linus and Snoopy, Cookie Monster and Elmo, and a dancing Snoopy and Woodstock ornament. We are glad to be able to keep up the tradition of getting them ornaments that will one day be hung with care on their very own trees. 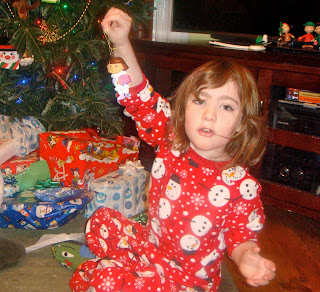 In addition to all of this, Lea received a puzzle and Hallie received a dragon puppet from their good friend Eliza Grace.  Both girls really enjoyed playing with these gifts. 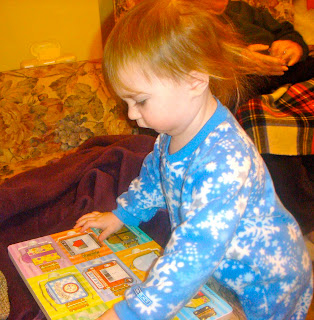 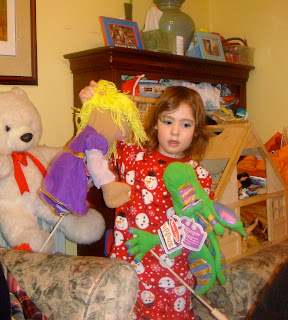 Sadly, we never made it over to the ICN at Pennsylvania Hospital with cookies and the girls as we had initially planned.  I could have run the cookies over before the big snow began but I suspect that the staff would have been disappointed if we had not had Hallie in tow.  But I also imagine that they would prefer that they, and especially their wee charges, be spared whatever crud is colonizing Hallie.  So we've revised the plans a bit and hope to get over there some time between now and the New Year.

We also have not gotten outside to play in the snow (this is not to be confused with getting outside to shovel the snow; I've had plenty of opportunity to do that).  One clear indication that Hallie is, so to speak, under the weather, is that she has not asked to go outside and build a snowman even once over the past 24 hours.  Another clear indication that something is amiss is that she is asking to go to bed quite early (even when dosed with albuterol not that long before bedtime).  Hopefully she'll improve soon and we'll at least be able to get out to see the snow if not actually play in it before it melts away by this weekend.  If not, I suspect there will be some more opportunities to do so this season.

I hope everyone out there who celebrates Christmas had a super holiday and that everyone is staying safe and warm.

What a magnificent, amazing, wonderful Christmas at Hallie and Lea's house!

Santa writes some great letters at your house. Hope you were able to keep it in some way or fashion. And improve upon it next year!

The cameras were incredible, and Eliza Grace's gifts were thoughtful.

Hope Hallie and Lea slept well. It can be ... cruddy ... to have crud round the festive season, especially with the memory of 2009-10 so recent (and so far).