One of our kids' favorite artists is Ralph Covert, of Ralph's World fame.  A rocker-turned-dad, Ralph's music is witty and easy on adult ears as well as fun for kids.  We discovered his music nearly a year and a half ago, when Hallie came home singing what she called the "lemonade song" (Happy Lemons) and then performed another, "Surfin' in My Imagination," which has become the song that Lea now most frequently requests by name.

Anyway, the kids were thrilled that we got ticket to the World Cafe Live Peanut Butter and Jams concert at which Ralph was performing.  They were accompanied by cousins Hannah and Adam, who had a blast, as well as by their friends Taylor (Renee's and Kim's little girl) and Mia and Sebastian, who are two of our friends' Carmen and Vicky's grandchildren. 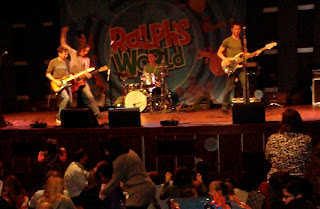 Hallie was excited to wear her guitar dress to the concert: 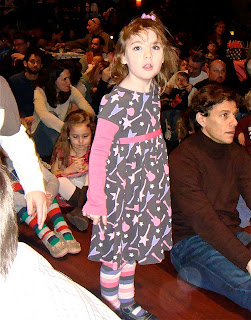 She had a great time dancing to the music, though it turns out that she was a bit scared about performing on stage (she went up with her little friends and a bunch of other kids when Ralph invited them to join him but was a bit put off by the whole thing).


That did not stop her from joining a kiddie conga line when invited by the little boy (standing behind her) who had his eyes on Hallie for the entire concert. 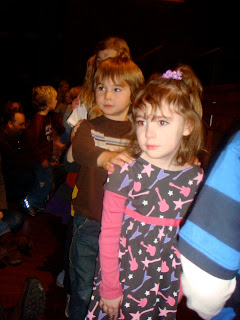 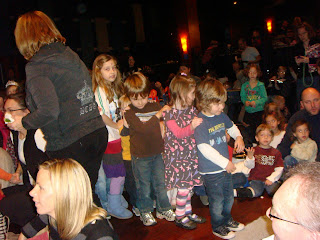 And it certainly did not keep her from dancing with abandon with her big cousin Hannah: 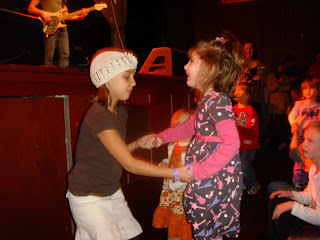 But it did mean that she kept looking to us for reassurance, which translated itself into snuggling into our arms.  Here, Sharon is holding both Lea and Hallie, whilst Renee is holding Taylor, who has somehow managed to fall asleep: 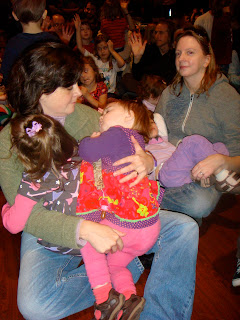 While Lea appears to be asleep in the above photo, she is not really dozing off.  Indeed, she popped up and began to dance and sing (through her binkie) when Ralph played the "Ringmaster Song" (the title track of The Rhyming Circus). 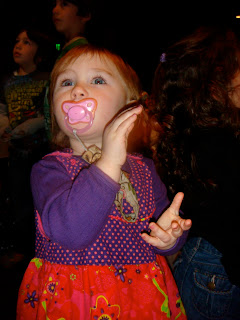 And Hallie, as usual, was excited to meet and greet Ralph in person, both before and after the concert. 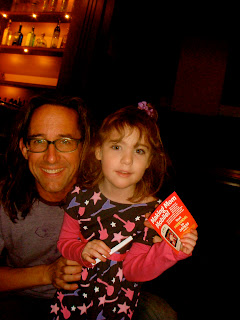 A great time was had by all and Adam, in particular, has been converted to a groupie of cult rocker Ralph Covert.
Posted by abby at 2:02 AM