An ATV is exactly what we have needed around here lately; last weekend, we got 28.5 inches of snow and, over the past 24 hours, we've received another 17+ inches. Final tallies are not in yet, but suffice it to say that Philly has now broken the record for the number of inches of snow received in any one season--which used to be 65.5 inches, set back in 1996. They've been keeping records since 1882 and so this is quite a feat. And the winter's not over yet.

You can't use any old vehicle to transport kids under these sorts of conditions: strollers are not very snow-friendly and we've already seen how much the toboggan appealed to Lea. So thank goodness for Gina and Jake. Even though they were both sick and unable to make it Lea's birthday party, we received their excellent gifts just in the nick of time. In addition to getting a shopping cart that makes her very happy, Lea was the recipient of this fine wagon: 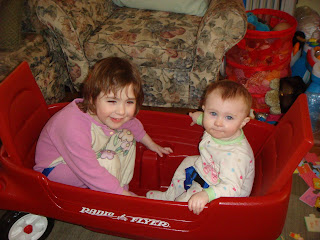 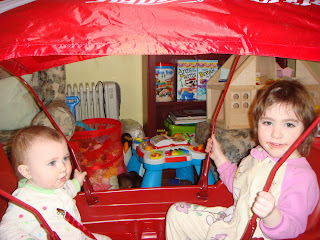 As you can see, both kids really enjoy its presence in our home. It's a two seater (with lots of cup holders) and they don't have much to fight over. Hallie tells us when she'd like to be in the "back seat" or the "front seat". And Lea is pretty much happy wherever she is.

Both kids helped Sharon put it together over the weekend when we were cooped up inside the house. They had snacks in the wagon, and its draw on Hallie was so great that she did not really notice or care that she consumed two whole cheddar cheese and peanut butter crackers while spending time in it. 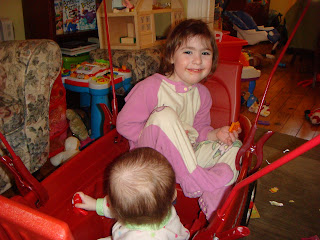 But the kids were a bit bored and stir crazy, having been cooped up inside for so long. So Sharon got the brilliant idea of taking them for a ride in the snow/ice in their shiny new wagon.

This voyage thrilled them: 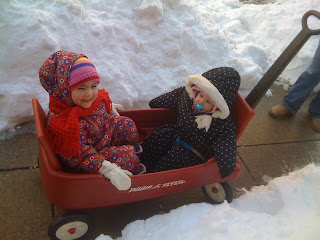 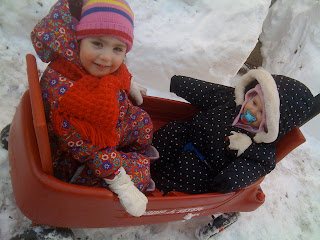 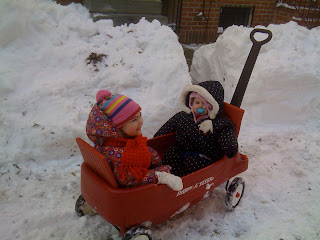 Lea thought it was great to go bumpity-bump and bopped up and down with glee as Sharon pulled the kids along the icy/snowy stretch on a tiny block around the corner from our house. And Hallie, as her broad smile indicates, of course had a blast.

Thank you, Jake and Gina, for making Lea's birthday and the (many) ensuing snow days such fun. And Radio Flyer might well have a new market for these wagons here in snowy Pennsylvania!
Posted by abby at 1:41 AM

This vehicle is incredible.

It's not so unlike the golfers and their caddies.

What an awesome wagon! Those cup-holders will come in very handy next Halloween! :)