A Sledding We Will Go!!! 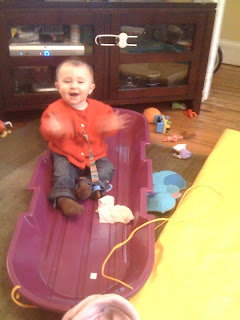 Our sled crisis is now officially over.

There was a slight delay in getting Hallie off to preschool today, which was not our fault; the divine Miss Flora is having an arthritis flare up and has been out of work. She thought that she would be able to return today but, alas, was in too much pain. The preschool is fine if Hallie is on her own during the short (2 hour) days, but the long ones are a bit more challenging since they involve a lunch, a nap, and lots of going outside, etc. Hallie's teacher explained it this way: it's not that the teachers would find Hallie terribly challenging--typically, she is pretty good at following directions especially in more structured contexts. It's just that she'd get less out of her day given that she often follows directions without completely understanding why she's being asked to do something. Flora helps by explaining things to Hallie in terms that Hallie understands and keeping her engaged with her peers, etc. Anyway, the agency that hires PCAs found a fill-in for Miss Flora by 10:30, so I bundled both kids into the stroller and took Hallie to school.

That gave me a bit less time to do my own work, but a bit more time than I needed to do the shopping, even accounting for the crowds that, for whatever reason, are intent on buying up all the milk and bread. (What do you suppose they are doing with that stuff? Having french toast feasts while watching the snow pour down? Perhaps....)

Anyway, that's when I got the brilliant idea of seeking out a sled at a brick-and-mortar location. I don't drive, so I was using the stroller on my quest, which sort of complicated things, I later discovered. The first place I checked was City Sports, and while they had something snow related, they had nothing age-appropriate in the sled department. I couldn't imagine bundling the kids into an inflatable inner tube or onto a small round disc and pushing them down a hill or something. So that was out. Onto Modells. Apparently the saying, "gotta go to Mo's" actually is true. Because they had precisely what I needed: a purple long, hard plastic toboggan with a long pull rope that was lightweight enough jam into the rear seat of the Phil & Ted's stroller (where, alas, it kept whacking me in the crotch on the uncomfortable, long walk home. Note to self: grow longer arms next time you attempt this feat).

When Lea awoke from her nap in the stroller and saw it, she was thrilled. And of course she climbed right in. Hallie did the same thing when she saw it after she got home from preschool. She informed me that "Santa riding red sleigh. Hallie go sledding in purple one."

Of course, mommy-brain that I am, I did forget to pick up carrots at Whole Foods, so I had to stop at the store again (and witness yet more milk and bread buying) on the way home from preschool with the girls. I told Hal that we were going to the store to get carrots to build a snowman and she was thrilled. She also requested that the snowman wear a hat and that it be "very very big." From what they are predicting, I think we can pull that one off just fine....
Posted by abby at 5:08 PM

Have fun in the snow this weekend! We're glad that the storm is missing us. We've had more than enough already.

Those flare-ups can well, be ... unpredictable!

And the sled is great fun.

That is one thing about those blizzards we are having!