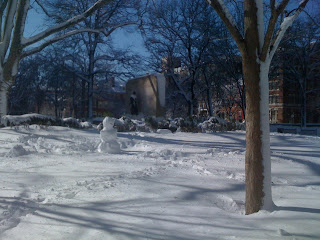 Here are a few of the images that Sharon took on her walk to work this past morning--on Thursday--after the huge snowfall that we received in Philly (which was Tuesday into Wednesday). The storm dumped around 16 inches of snow on Philadelphia, about two of which were in the form of ice/sleet/freezing rain. This, on top of the 28.5 inches we received over the past weekend has left an awesome coating on the City of Brotherly Love. These shots were all taken around Washington Square/Independence Hall, which, as you can see, was deserted at rush hour today (usually there is a ton of foot traffic). The buses going north to south (and vice versa) in the city were not running at all and South Philly (where we live, technically) was a huge mess and remained so throughout the day. We'll try to get some shots of our block tomorrow so that everyone can see what we mean. The city did a fabulous job of plowing after the first storm, but the two inches of ice underneath all that snow has made it really hard to remove the snow. Sidewalks are equally treacherous (my snow cleats came in handy on Sharon's walk to work, to say the least). Things are going to remain pretty bad around here for some time, I fear. The next week or so will be pretty cold and we are slated to get a little more snow on Monday into Tuesday, so who the heck knows when we'll dig out. That groundhog over in Western PA needs to go is what I think! 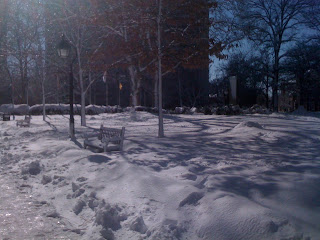 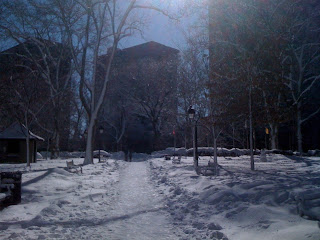 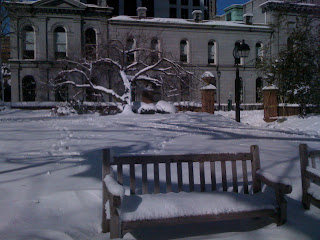 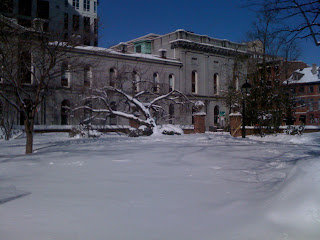 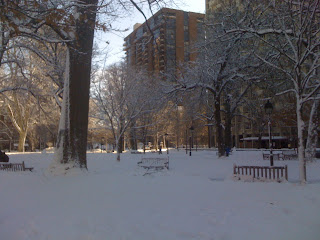 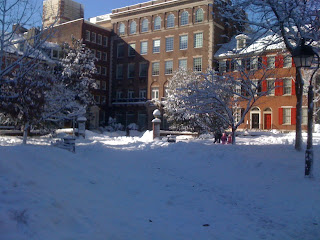 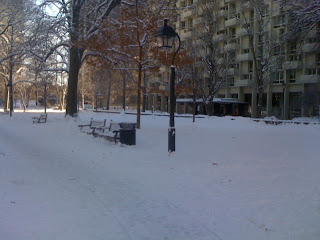 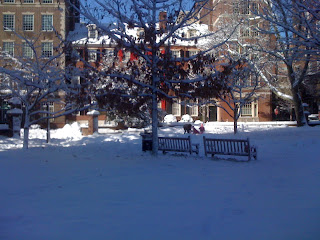 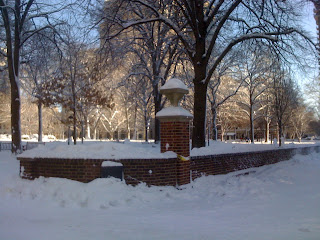 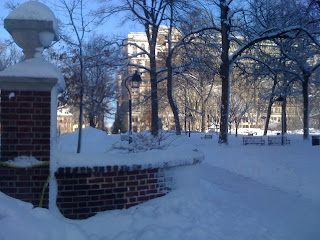 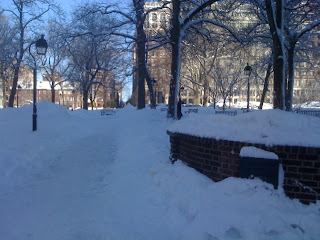 The kids did okay today, but are suffering from extreme cabin fever. The schools are closed and, needless to say, our nanny could not make it in today, so things got a bit dicey around here when both kids decided that they were so off schedule that they no longer required naps, at all.

Hallie was a bit thrown off by not going to school yet again. This was the occasion of her very first "Why?" question. As Sharon was getting into her cold weather gear this morning, Hallie inquired, "we're going to school now?" Sharon replied, "no," and Hallie retorted, "Why?" This was awesome: it represents the beginning of logical thinking (which in Stanley Greenspan-speak is Stage 6 of the developmental scale). We were overcome with joy (I actually began to tear up). We don't know when Hallie will come out with her next "why?" but just knowing that she is capable of asking, and wants to know why things are the way they are gives us great hope for the future. And I promise to answer every one of those questions that come out of her mouth...explaining the "becauses" will just help her make those logical connections even more solidly.

After Sharon left, the kids and I played and played. Perhaps projecting their own desires, the kids spent quite some time with the Fisher Price Little People's playground set: 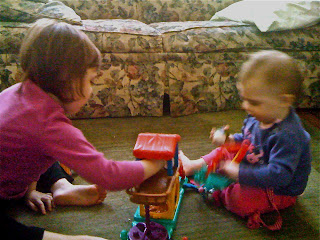 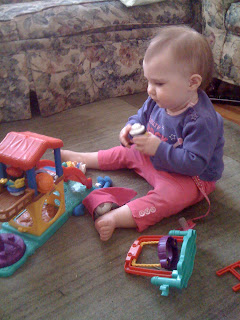 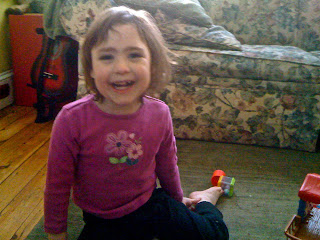 Then, later on, during one of my abortive attempts to put the kids down for a nap (I'd have settled for either of the kids, really, but was attempting a 2-for-1 deal), we went upstairs to the bedroom. I tried to coax Hallie to get into the bed while I rocked Lea in the glider, and initially the idea seemed like a good one. Alas, she just kept popping back up out of bed and asking for various of her "buddies" (which is what she calls her stuffed Sesame Street, Pooh, and other assorted animals/creatures) to join her. She dragged all of them off to the bed with her but was way to keyed up to sleep. So she came back into the smaller bedroom (which adjoins the larger one that is technically where the girls sleep; the big room holds the futon and the small room houses the crib-in-which-no-child-has-ever-spent-a-night and my desk and the glider). I put Lea down in the crib and turned on the mobile in the hopes that a miracle (of sleep) might happen, but no go. Then Hallie decided that she wanted to get into the crib, too, and had the great idea that her buddies should join her there. So the whole experience turned into one massive Floortime session with various buddies jumping into the crib, leaping into her arms, hugging her (she is especially fond of Cookie Monster's hugs---I do a fabulous Cookie imitation, if I may say so myself, and this has always captured Hallie's imagination and made her very, very happy). 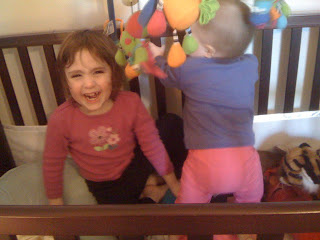 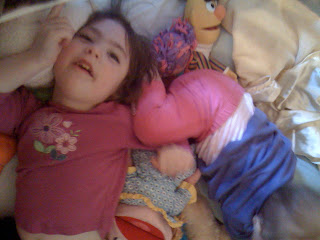 Once Lea got to the point of extreme crankiness, the game ended, and we went back downstairs to play. Lea finally did fall asleep (for all of 25 minutes the first time, and for about 45 minutes the second time, two hours later). Hallie never did, but was asleep before 9:00pm tonight, which is almost unheard of in these here parts.

School is open tomorrow, thank heavens. And hopefully Nadia will make it in (that's the plan, at least) and I can get some of my own work done. And hopefully this was our last major storm of the season. But all in all, even as we dig ourselves out and struggle to return to normal schedules, Sharon, Hallie, Lea, and all of our "buddies" did manage to survive (most of) the week just fine. But Spring's arrival will be very much welcome around here just the same!
Posted by abby at 1:04 AM

Watch out, you start actually answering those "why" questions and next thing you know you're explaining Keynesian economics, the fall of Rome, Arthurian legend, and political sex scandals.

Seriously, I can't make this stuff up.

WOW! How huge is that?! I love it that she asked "Why?" and for a perfectly appropriate reason! I still tear up at all those developmental milestones. Time for a Why dance! Go, Hallie! Go Hallie!

Just catching up on everyone's blogs...backing up to your milk and bread comment. That made me laugh so much. Ben and I always make sarcastic comments about the whole "milk and bread" phenomenon during snow times. We hardly even drink milk!

I've always wondered about thousands of people sitting around eating bread and drinking milk too. I guess French Toast is as good a solution as any - as long as you bought eggs too!

So happy Hallie is doing so well. And so happy little Lea is so average:-)

I had some thoughts of traveling through on my way to New York to see my sister. But since the route in waist deep in snow, I'll have to wait:-) Hopefully in the next month or so we'll take a trip and I hope to get to meet you all.