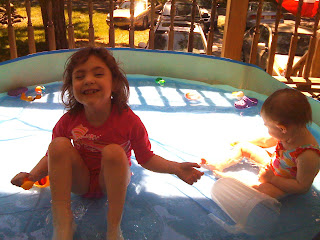 This weekend was the unofficial start of summer, so what better way than to celebrate it in a pool? The kids had ample opportunity -- on Sunday evening we spent time with Grammy and her friends at a BBQ hosted by Jeanette (who happens to be the mom of the most excellent guy in the world who saved our butts when we ended up with a flat tire on Sunday night...he could have just given us directions to the closest gas station where we could fill our tire. Instead he followed us there, which ended up being a very good thing since we had a nail in the tire. Then he jacked up the car, removed the tire after a bit of a struggle to dislodge it from its axle, and put the doughnut on for us. I guess there was a very good reason why Lea snuggled up to Curtis and made flirty eyes at him...).

Anyway, before the tire saga, we enjoyed a lovely day on Jeanette's patio in the pool that Grammy bought for the kids: 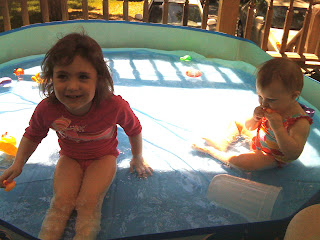 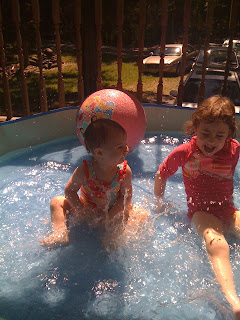 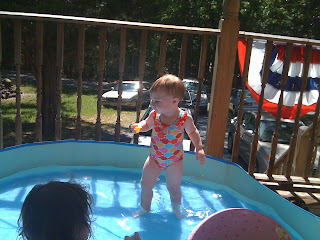 Then, on Monday, I took the girls over to Renee and Kim's to play with Taylor while Sharon drove the car over to Pep Boys to have the offending tire repaired and put back on the car. We dashed into Whole Foods on the way where I got some burgers and hot dogs and corn for the grill. The kids played inside for a while and then repaired to the third floor deck which now sports a wading pool (same one as our new one, as it turns out), a Step 2 play house and a pirate cove water table. 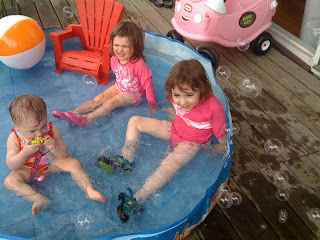 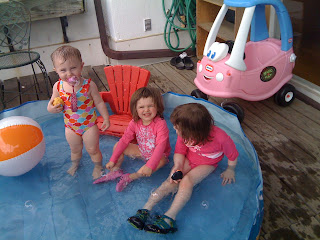 The girls had a blast: they enjoyed splashing in the water and then going to the 'snack bar' (the play house), where Kim played short order cook. There was lots of real eating (Lea loves her corn, as we all know by now, and Niman Ranch beef hot dogs and Whole Foods' steakhouse burgers are quite delicious) and lots of pretend play. This was followed up by ice cream for dessert (Hallie is a bit of a chocolate ice cream fanatic, which probably accounts for her slow but steady weight gain this spring) and a few zips around Renee and Kim's living room in Taylor's Radio Flyer wagon for each of the girls (Hallie started out pushing Lea but then asked to take her own turn with Lea on her lap. This made the wagon quite heavy but, fortunately or unfortunately, row houses in Philly are so small that it's not like we were pushing the vehicle for a particularly long distance).

By the time the evening was over, the kids were exhausted. It's no more than a five minute drive home from Renee and Kim's house to our place, but somehow Hallie managed to fall fast asleep in the car on the way. Usually she'll wake up when the car stops or we remove her from her car seat, but not this time around: she was out for the count. Sharon brought her upstairs and laid her down in her tank top and shorts and that was it for Hallie for the night. Lea was almost as tired as her big sister (she had a mini nap at Renee and Kim's, but no real nap that day) and so she went down (on Sharon's lap, in nursing position) pretty easily.

That meant that, for the first time I can recall in a very long time, we were almost kid-free (I suppose the fact that Sharon was holding Lea warrants the placement of the 'almost' in that sentence) for the night. This allowed us to finish watching the final hour of Julie & Julia, which we'd been meaning to see since it came out in the theater (we don't actually get to go to movies, but Sharon did buy me the DVD for the holidays, and it's been cued up in the player since then...). We thoroughly enjoyed it, and each other's adult company.

Loved Julie and Julie. I am currently reading the book (and have been trying to finish it for the last couple of months. LOL!

Hooray for alone time! Or semi-alone time, as the case may be... Exhausted kiddos equal happy mamas' as far as I'm concerned! Can't wait to see you next week (this is me RSVPing, in case I'm a ditz and forget to call you...)

You probably would have loved Julia and Julie.

(especially the cooking and blogging bits).

Hailie and Lea were tired!