Lea has quite the personality and now that she is getting on 16 months of age (where in the world has time gone?), it's becoming more and more pronounced.
First, there's her fashion sense: 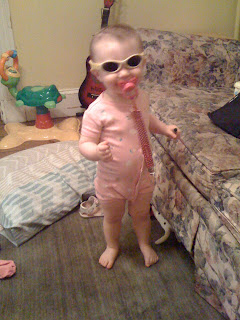 Our kiddo is fond of trying on all sort of eyewear and haberdashery and frequently can be found wandering around the house in one shoe (for some reason, always the right one). It's not that she cannot locate the second shoe; that would be me: I often spend the last five minutes before leaving the house in search of one or another kid's missing shoes. Lea can invariably lead me to it since she's often the one who has hidden it.

Lea loves hiding stuff. She has her favorite locations--behind the easel, in the cushions of the couch, and inside the recesses of one of the toy bins, to name a few. Pieces and parts of toys will go missing for days and I will spend hours searching for them (I absolutely hate putting away an incomplete puzzle or toy and it's hard for me not to obsess about the missing parts). I will just about have given up when Lea will present me with the part that has gone missing or the item will resurface, always in the possession of our little imp. Lea, who has long been a devotee of hiding her face and playing peek-a-boo games with us now has taken this one step further: the other night, she grabbed two of her favorite dollhouse residents and began hiding them under the skirt of the couch and playing peek-a-boo with them. She'd get very excited when I 'found' them and said 'peek a boo'. It was totally cute.

Another thing that Lea really enjoys is animals of all kinds. Zen, of course, is her favorite, and she can often be found chasing Zen around the house, offering him food and toys (she's extraordinarily fond of sharing and often tries to get Zen to suck on her binky or take a bite of her ice cream), or trying to dress him up in various items of clothing that Lea picks up (we often have laundry in various stages of done-ness at the base of the stairs that are either heading down to the washing machine or upstairs to be folded. Dragging them around the house, climbing into a laundry basket if available, and creating a general mess and tangle of clothing is one of the kids' favorite pastimes). She also has this little blue lotion bottle (that goes with a doll-care set) that she particularly associates with Zen.

Whenever she sees Zen she grabs the thing and tries to slather him with (fake) lotion. If she can't find Zen, she'll call out for him. I believe that she has acquired this habit from me. It's absolutely hilarious to watch Lea stand at the base of the stairs screeching, "Zen! Zenny! Cat!" in an effort to have him come downstairs so that she can love on him: 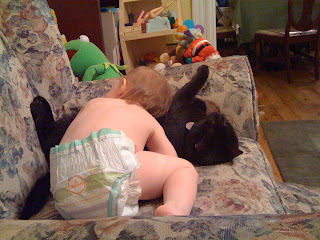 Lea doesn't just use Zen as a pillow. She also tries to use him as a chair. Last night, when we were hanging out downstairs, she gave me this impish grin and then began to lower her tush onto Zen. And tonight she decided that Zen would make a really great horse and straddled him, Western-style, and began to bop up and down. The cat mostly takes whatever Lea has to dish out; he even tolerates her dress-up play. He apparently understands that she's a baby and that everything she does to him is motivated by pure and simple love.

But Lea's love of animals doesn't stop at Zen. If there's an animal anywhere in the vicinity she seeks it out. A few weeks ago, I took the kids to the Academy of Natural Sciences, which features a children's museum called Outside In. The exhibit includes lots of rocks, space for digging in the sand, some puzzles and animal- or nature-themed toys, and a few live animals which the handlers will regularly remove from their cages so that the kids can get up close and personal with them. It would be an understatement to say that Lea was both thrilled and that she knew no fear. 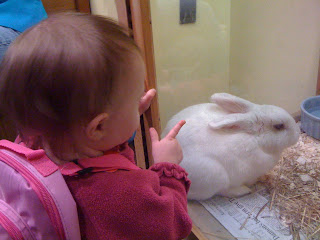 Alas, I did not get a picture of Lea petting the rabbit directly, which she did many times, quite enthusiastically. This was mostly attributable to the fact that I was trying to save her fingers (and other body parts) from the bunny's extraordinarily sharp teeth.

After the bunny was put back in his cage, Lea moved onto a skink (which is apparently a diverse family of lizards): 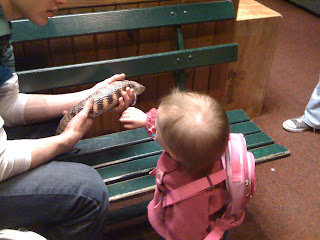 Lea is also enamored of animals that are merely representations of their living counterparts. She is particularly fond of ducks and likes to walk around with rubber duckies in her hands saying "duck! quack quack!". She also points them out to me whenever she sees them. Of course, we live in the middle of the city and there are not too many ducks walking around the streets (or even hanging out in the parks and playgrounds that we frequent) around here. Never mind: Lea is happy to point to pigeons and say "duck" and whenever I correct her by saying, "No, honey, it's a pigeon" or "that's a bird" (trying to keep things simple for her) she shakes her head at me and emphatically stomps her feet and says, "DUCK!" even more loudly. Here's Lea with a 'duck' (yeah, I know it's a goose...I'm pretty sure it's the one who laid the golden egg...) at the Please Touch Museum. 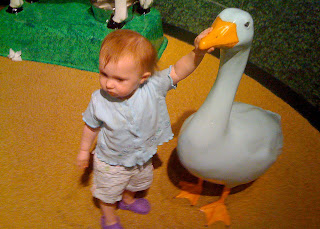 And here's Lea with a cow from the same exhibit. 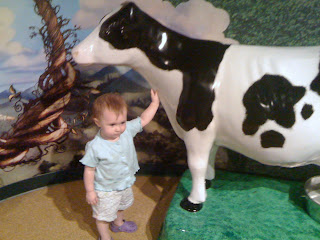 To my knowledge, she doesn't say cow yet, but give her time!

What Lea does say is pretty much everything else. She is extraordinarily fond of pulling up her shirt and saying "belly!" with a great deal of pride while she clutches her tummy. She asks for strawberries, crackers, ice cream, bottles, and corn. She calls Hallie "Allie!" and me "Mama!" and Sharon "Ah-Mah!" (we have been trying to get her to say "mommy" to no avail). And she can even request her favorite episode of "Gabba" (Yo Gabba Gabba), which is the "Art" episode by asking for "Art Show," a song which she enjoys singing.

Lea loves singing and will often sing to herself in the stroller or car seat. And her favorite song is the same one that enraptured her sister at this age, the "ABC song." Lea loves her ABCs and can sing along with most of the alphabet. She also loves her Leapfrog magnetic alphabet toy and I am pretty certain (having done a few process-of-elimination experiments after Lea grabbed the O once and said "O") that Lea knows at least that one letter by sight.

Lea continues to enjoy lots of food, but mostly in small quantities. She is particularly fond of grazing on berries: 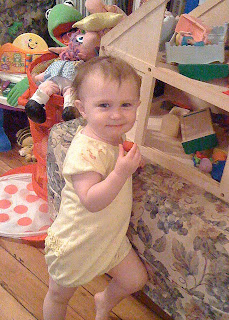 Lea's penchant for small portions, however, did not stop her from devouring an entire ear of corn on the cobb last night at our Memorial Day get-together with Renee, Taylor, and Kim. And it definitely did not stop her from stealing my hydroponic basil plant from off of the counter and chomping away happily on it: 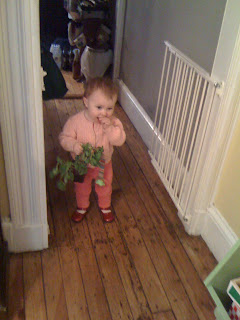 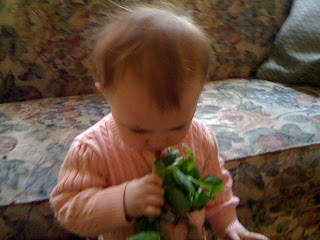 At her 15 month appointment, which was a couple of weeks ago, Lea clocked in at 22 pounds and a little over 30 inches tall. She's at about the 30-40th percentile for height and weight (and hence, oddly, smaller than Hallie was at the same age). Her head, however, is at the 75th percentile or so (which means that hats that fit Hallie are a bit of a tight squeeze on Lea). But lots of impish things come in small packages, and Lea is great proof of this.

That's all I have time to write at this point (it's taken me five days to finish this post!) but I promise to try to be better about updates.

As Lea might say, as she tries to lock or unlock the door, "Bye Bye! Have a good day!" 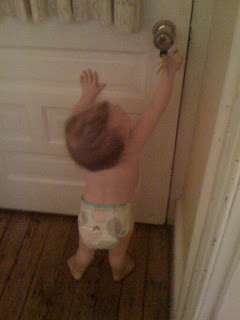 Great to read this entry about Lea and her love for all creatures: from cats to rabbits to skinks to plastic ducks and cows!

It was also interesting to read about Memorial Day.