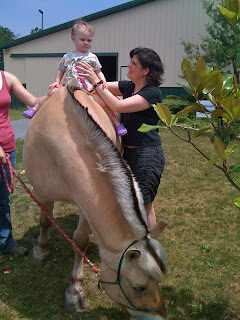 On Saturday, Lea napped in the car with me while Hallie went off with Sharon to ride Sir G (whose real name is Sir Gawain; he's a Gypsy horse and, apparently, he doesn't really like any of his other riders but adores Hallie). Part way through Hallie's session, Lea woke up. I took her out of her carseat and let her run around in front of ARCH. Anders, pictured above, who is a very sturdy Fjord, was enjoying his lunch. Lea, of course, noticed him and screeched, "HORSIE!". I brought her over to see him and Jen, the volunteer who was hanging out with him, said that Lea could pet him. Lea pet him, and kissed him, and pet him some more. Then Jen let me put Lea on his back, which thrilled her to pieces. I ran and got Sharon and had her hold Lea while I took a few pictures.

So, even though Lea is too young to ride in ARCH's sibling program (she has to be seven to do this), she at least got to sit astride someone other than me or poor Zen.

On a related note, Lea's language is really exploding. She says five or ten new words a day and is asking for things by their name when she knows it/when she's not too frustrated to do something other than scream/whine. And she's beginning to put two words together, too. On Friday she said to me "Bubbles! My turn!" when I was blowing bubbles for her (which, as it was for Hallie, is a favorite pastime of Lea's). And on Saturday, when we were headed off to ARCH for Hallie's session, she said to Grammy (at whose place we were staying in order to avoid Saturday morning shore traffic), "Bye Bye Grammy!" How cute! It is really fascinating to me to watch a typically-developing child's language develop.
Posted by abby at 12:32 AM

That's right, make her wait another 6 years until she can sit on a horse.